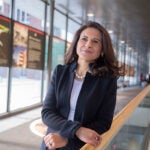 Data science for a new era

Former U.S. Secretary of Defense Ash Carter will join the Harvard Kennedy School as the director of the Belfer Center for Science and International Affairs and the Belfer Professor of Technology and Global Affairs, the School announced Tuesday.

Carter will succeed Graham Allison, who has been director since 1995 and will continue as the Douglas Dillon Professor of Government at the School.

Carter, a physicist, became known while defense secretary for pushing the Pentagon to “think outside its five-sided box” to transform how the military fought adversaries and strengthened alliances. He also managed the department’s budget and talent and developed its technology. As head of the Belfer Center’s programs, he plans to focus his scholarship on the role of innovation and technology in addressing challenges at home and abroad.

To bolster this effort and the Kennedy School’s other activities in global affairs and science and technology, Robert and Renée Belfer are making a major new funding commitment through a series of gifts. In addition to establishing a named professorship to which Carter will be appointed, their gifts will support additional financial aid for students as well as research initiatives and policy engagement by faculty members.

“I am delighted to welcome Ash Carter back to Harvard. His career has been one of great academic accomplishment and distinguished government service, most recently as secretary of defense,” said Harvard President Drew Faust. “His knowledge, experience, and commitment to the future of public service and public policy will be of great benefit to our students and scholars and to the world well beyond our walls.”

“I look forward to leading this vital center and helping develop the next generation of global leaders,” said Carter. “Technology has a fundamental role to play in solving some of our nation’s and other nations’ most complex problems, and I look forward to working with the Kennedy School’s world-class scholars and students to explore how innovation can advance the public good.”

“Everyone who cares about technology and global affairs has benefited tremendously from Robert and Renée Belfer’s generous support of the Kennedy School’s work,” said the School’s dean, Doug Elmendorf. “By establishing a new professorship, endowing student fellowships, and reinforcing the research and policy engagement of our outstanding faculty, the Belfers are again helping us to move strongly forward. Ash Carter’s decision to become director makes me even more excited about the Belfer Center’s future.”

As secretary of defense, Carter designed the coalition military campaign to counter the ISIL threat, executed the Defense Department’s strategic pivot to the Asia-Pacific region, established NATO’s new playbook for confronting Russia’s aggression in Europe, and launched the department’s latest cyber strategy. Carter also spearheaded improvements in the department, including pushing new investments in technology; launching “Force of the Future” initiatives to change the way the department recruits, trains, and retains quality people; opening all military positions to women; and establishing Pentagon outposts in Boston, Silicon Valley, and other tech hubs to reconnect the government and military with visionary private-sector leaders and companies.

Allison said, “I have been proud to lead the Belfer Center for over two decades, and I am grateful to hand the baton to my good friend Ash Carter to lead the institution we love into the future. I appreciate and applaud the extraordinary efforts of Bob Belfer and Doug Elmendorf that have made this happen.”

Allison is a leading scholar of U.S. national security and defense policy. He is the author of numerous influential and best-selling books, and his forthcoming “Destined for War: Can America and China Escape Thucydides’s Trap?” will be published in May.

Allison was the founding dean of the modern Kennedy School, leading it from 1977 to 1989. During that period, a small program expanded many times over to become a major professional School with a significant impact on governments and public policy in the United States and the world. Allison also served as special advisor to the secretary of defense under President Ronald Reagan and as assistant secretary of defense for policy and plans under President Bill Clinton. He twice has been awarded the Department of Defense’s highest civilian award, the Distinguished Public Service Medal.

“For more than 20 years we have supported Harvard Kennedy School and the Belfer Center for Science and International Affairs,” said Bob Belfer. “It has been a privilege to work with Graham Allison, who has led the center to its current position as the top-ranked, university-affiliated research center in the world. I’m thrilled with the arrival of Secretary Carter, who brings his extraordinary expertise in government service to lead the center to doing even more to tackle the world’s most vexing problems.”

“It is impossible to overestimate Graham Allison’s vision and energy in making the Kennedy School and the Belfer Center the successful and influential organizations they are today,” said Elmendorf. “We will be forever grateful for his incomparable contributions to the Belfer Center, and we look forward to his continued advice and vigorous participation in all of our activities.”

Eric Rosenbach will become the Belfer Center’s co-director and a lecturer in public policy at the Kennedy School. Rosenbach served as Carter’s chief of staff at the Pentagon, as the first principal cyber advisor to the secretary of defense, and as assistant secretary of defense for homeland defense and global security.

The Belfer Center is the hub of the Kennedy School’s research, teaching, and training in international security and diplomacy, environmental and resource issues, and science and technology policy. For the past four years, the Belfer Center has been named the top university-affiliated research center in the world, according to the Global Go To Think Tank Index at the University of Pennsylvania.

The center has a twofold mission: to advance policy-relevant knowledge about the most important challenges of international security and other critical issues where science, technology, environmental policy, and international affairs intersect; and to prepare future leaders for these arenas. The heart of the center is its resident research community of more than 150 scholars, including Harvard faculty, practitioners, researchers, and each year a new, international group of fellows. Through publications and policy discussions, workshops, seminars, and conferences, the center promotes innovative solutions to national and international challenges.

Before becoming secretary of defense, Carter served in the department’s No. 2 and No. 3 roles. As deputy secretary and chief operating officer from 2011 to 2013, he oversaw the department’s management and personnel, and he steered its strategy and budget through the turmoil of the appropriations sequester. As undersecretary of defense for acquisition, technology, and logistics from 2009 to 2011, Carter led the department’s procurement reform and innovation agenda, the successful completion of key procurements like the KC-46 tanker, rapid support for ongoing wars, and global logistics.

He was assistant secretary of defense for international security policy from 1993 to 1996, where he oversaw the Nunn-Lugar program that removed and eliminated nuclear weapons from Russia, Ukraine, Kazakhstan, and Belarus; military planning during the 1994 crisis over North Korea’s nuclear weapons program; and the U.S. nuclear arsenal. In the Defense Department and on Capitol Hill during the Cold War, Carter was known for his work on missile defense and the then-Strategic Defense Initiative, as well as basing options for the MX missile.