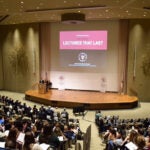 In private sessions, Clinton shares lessons of her time as secretary of state

With nary a dog leash or hiking boot in sight, Hillary Clinton took a break from her recent walks in the Chappaqua woods near her home in New York state to crisscross Harvard’s campus Friday to reflect on her time as U.S. secretary of state at a handful of private events.

In the morning, she spoke with a small gathering of undergraduate members of the Institute of Politics’ Student Advisory Committee during a private event at Kirkland House that was closed to the media.

Later, she was interviewed about some of the most consequential negotiations she engaged in during the Obama administration by Professors Nicholas Burns of the Harvard Kennedy School, Robert Mnookin of Harvard Law School, and James Sebenius of Harvard Business School. The three jointly teach “Great Negotiators, Effective Diplomacy, and Intractable Conflicts,” a course on diplomacy.

The conversation, which will be documented in a forthcoming book and PBS television series, was part of the American Secretaries of State Project, a collaborative effort of the Belfer Center’s Future of Diplomacy Project (which Burns leads), the Law School’s Program on Negotiation, and the Business School.

As a crowd of eager well-wishers gathered outside Loeb House, Clinton was honored at a luncheon inside with distinguished faculty, administrators, and select graduate students. She also answered questions about her tenure as secretary, from 2009-13.