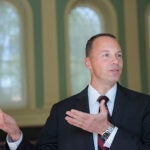 Nearly 150 Harvard alumni shared their experience and expertise at the sixth annual Public Interested Conference at the Science Center last Saturday, serving as both inspiring role models and enthusiastic mentors to students and fellow alumni interested in exploring a career in public service. While alumni speakers represented a wide range of fields and organizations, from government to global health to social entrepreneurship, they struck a common chord in their advice to attendees: Your talents are needed, perhaps now more than ever.

“There are critical opportunities to serve others and change the world by putting your public service passion to work. You have the choice — seize upon it,” said Maribel Hernández Rivera ’04, executive director of legal initiatives at the New York City Mayor’s Office of Immigrant Affairs and leader of ActionNYC, a program that provides free immigration legal services in communities across the five boroughs.

Tulante, who was born in Zaire (now Democratic Republic of Congo) and immigrated to the United States as a child, said he decided to throw out his original presentation and start from scratch in light of President Trump’s executive order on immigration. “I am a refugee, and I am an American,” he began.

Tulante and his family sought asylum in the U.S. after his father was arrested as a political dissident by dictator Mobutu Sese Seko. Settling in Philadelphia in 1983, the family relied upon the “selfless dedication” of refugee organizations, teachers, and others in the community. Having benefited from this support and now being in a position to manage public service groups in city government, Tulante urged students to consider getting engaged at the local level.

“The talk is that all politics is local. In my view, all public service is local,” he said. “You’re going to really see the impact you have on everyday citizens. I guarantee you that, over the next few years, cities across the country are going to be the engines of change.”

The full-day conference also featured an alumni workshop, a keynote address by tribal rights attorney Tara Houska, a panel discussion for underclassmen and alumni, breakout sessions for seniors across nine public service career tracks, and a networking and recruiting reception.

Gene Corbin, M.P.A. ’01, assistant dean of Harvard College for public service, says the event is a boon for students, who don’t have many opportunities to interact with people working in the public interest sector.

“Public sector fields don’t recruit quite like investment banking or consulting; it requires a little more patience and networking to find positions. Having caring alumni help you navigate getting a job is powerful support,” said Corbin, of the Phillips Brooks House Center for Public Service & Engaged Scholarship, who coordinates the conference in collaboration with the Center for Public Interest Careers, the Harvard Alumni Association, the Harvard Global Health Institute, the Harvard Varsity Club, the Institute of Politics, the Office of Career Services, the Office for Sustainability, the Phillips Brooks House Association, and the Public Service Network.

And it’s not just students who benefit from the conference. “Over six years, we’ve established a community of alumni who network and support one another,” Corbin said.

Alumni also trumpeted the value of the Harvard network during a panel discussion titled “Why Work in the Public Interest Sector.”

“Don’t be afraid to reach out to us,” said Erica Scott-Pacheco ’06, director of development at South Coastal Counties Legal Services. “I know networking can be kind of scary, but it’s true that most of the jobs you’re going to get are because of personal connections, especially in this field. People are always willing to give you advice.”

Noting that many young people, and Harvard students in particular, tend to “endow every decision with an immense amount of weight,” Himes also emphasized that there is no defined path to a successful career in public service or anything else. “You’re going to need to find ways to bust out of what everyone tells you is the next step,” he said. “You’re here because of the excruciatingly good work you did in following that path, but sometimes happiness comes in challenging yourself on whether you really want to be on that path.”

Having heard from so many accomplished alumni working in public service throughout the day, Hernández Rivera closed the speaker portion of the conference with a confession: “I arrived here feeling demoralized … but thanks to all of you here today, I have been inspired, I have been energized, and I’m ready to continue to advocate to make the world a better place.”