To understand Trump, learn from his voters 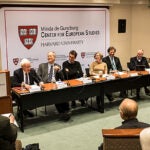 They’re concerned with inequality, the hubris of elites, the dignity of work, and patriotism, Sandel says

To make sense of Donald Trump’s emerging presidency, it helps to understand the social and economic discontent that put him in office. Harvard Professor Michael Sandel took a hard look at those concerns during a Tuesday afternoon lecture called “Why Trump? What Now?” Sandel argued that Trump’s rise reflected a populist backlash against “decades of rising inequality and a version of globalization that benefited those at the top but left ordinary people feeling disempowered.”

Addressing a full house at Harvard Law School’s Langdell Hall, Sandel first acknowledged the concerns of many of his listeners.

“Many people around the world worry that the American republic is tilting toward tyranny,” he said. “Many Americans worry too.”

Trump’s presidency, Sandel suggested, is most comparable to Richard Nixon’s because each posed a “stress test” to the constitutional order.  Both referred to the news media as enemies of the American people. “That phrase has a long and dark provenance,” he said. “It’s been used by Lenin, Stalin, Hitler, and Mao — ‘big-league tyrants,’ as Mr. Trump might call them.”

Yet it’s a mistake, said Sandel, the Anne T. and Robert M. Bass Professor of Government, to see Trump’s win as only the product of bigotry, or even of economic concerns. “Donald Trump tapped into a wellspring of anxieties and legitimate grievances, to which the mainstream parties offered no compelling answers. The upheavals of 2016 were a political response to a political failure of historic proportions.”

The roots of that failure, he said, go back to the Clinton years, when Democrats deregulated the financial industry and did little to address growing inequality and the influence of money on politics. And though President Barack Obama “showed that progressive politics can speak a language of moral and spiritual purpose,” Sandel thought that wasn’t reflected in his presidency.

“He appointed economic advisers who had promoted financial deregulation in the Clinton years. He bailed out the banks on terms that did not hold them to account and offered little help for ordinary citizens who lost their homes. Lingering anger over the bailout cast a shadow over the Obama presidency and fueled a mood of populist protest across the political spectrum.  On the left, it prompted the Occupy movement and the candidacy of Bernie Sanders. And on the right, it prompted the Tea Party movement and the election of Trump.”

Sandel, the author of “Democracy’s Discontent,” argued that progressive parties must rethink their mission and purpose. “They should learn from the populism that has displaced them — not by replicating the xenophobia and strident nationalism, but by taking seriously the legitimate concerns with which these ugly sentiments are entangled.” In particular, he said, there are four themes that need to be addressed: income inequality, meritocratic hubris, the dignity of work, and patriotism and national community.

The first two points, he said, are related. Income inequality is now so widespread that the promise of upward mobility is no longer an adequate response. The familiar assurance that those who “work hard and play by the rules will succeed” no longer seems to apply.

“This slogan now rings hollow. Americans born to poor families tend to stay poor as adults. Progressives should reconsider the assumption that mobility can compensate for inequality.  They should reckon more directly with inequalities of income and wealth,” said Sandel.

This is tied to the problem of “meritocratic hubris,” the sense that winners and losers are both deserving of their status. “The idea that the system rewards talent and hard work encourages the winners to consider their success their own doing, and to look down upon those less fortunate than themselves,” he said. “Those who are not successful may feel that their failure is their own doing. Such attitudes fuel the anger and frustration at the heart of the populist backlash, and Trump’s victory.”

This led in turn to his third point, that society now accords less respect to the work that the working class does.

“Society has lavished outsize rewards on hedge fund managers, and the esteem accorded work in the traditional sense has become fragile and uncertain,” he said. “New technologies may further erode the dignity of work, rendering many of today’s jobs obsolete. Political parties need to grapple with the meaning of work and its place in a good life.”

Finally, he examined the issue of patriotism, specifically the populist fury that immigration and outsourcing have stirred in some.

“Workers who believe that their country cares more for cheap goods and cheap labor than the job prospects of its own people feel betrayed,” he said. “This sense of betrayal often finds ugly, intolerant expression: hatred of immigrants, a strident nationalism that vilifies ‘outsiders,’ and the rhetoric of ‘taking back our country.’ Liberals rightly condemn the hateful rhetoric, but fail to address important questions implicit in the populist complaint: What is the moral significance of national borders? Do we owe more to our fellow citizens than we owe citizens of other countries? In a global age, should we cultivate national identities or aspire to a a cosmopolitan culture of universal human concern?”

Those questions, he allowed, are not easily answered. “They may seem daunting, but the Trumpian moment highlights the need to rejuvenate democratic public discourse. Understanding these grievances and creating a politics that can respond to them is the most pressing political challenge of our time.”

When a student asked what Sandel thought was in store for the next four years, he replied that it’s really up to each of us. He warned that protest movements, while admirable, carry unique risks in this era. One risk relates to the frenzied distraction promoted by cable news, which conflates crucial issues with trivial ones. “If you watch cable news, you might think that the Trump travel ban and the Russian involvement in the election are somehow equivalent to a Trump aide flogging Ivanka’s products.”

A bigger risk, he said, is that unruly protests can contribute to an overall sense of chaos that suits Trump’s politics. “Tumult and confusion actually strengthen his agenda. We saw this happen with the travel ban. The protests there were laudable and admirable. In previous presidencies, having a policy rollout beset by chaos has weakened the president’s agenda. For Trump, it doesn’t work that way.”