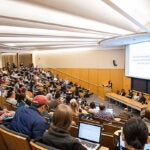 There are thousands of unapproved substances, often banned elsewhere, in the U.S. environment

No one who has ever worried about toxic chemicals in the everyday environment would have had his or her fears allayed by attending the Harvard T.H. Chan School of Public Health forum “Hormone-Altering Chemicals: Fertility and Health Implications.”

Presented jointly with the Huffington Post, whose senior living editor, Erin Schumaker, was the moderator, the panel focused on chemicals that affect the endocrine system, and their effects on fertility and childbirth. But the central point of the talk was contained in four words, screened in a video by the Environmental Working Group: “Toxic chemicals are everywhere.”

The panel opened Tuesday afternoon with some sobering statistics: Everyday products —personal hygiene products, medications, food packaging, objects such as window blinds — contain more than 10,000 chemicals that have not been approved by the Food and Drug Administration, and many of them are banned in China and the European Union.

Russ Hauser, acting chair of the Department of Environmental Health at the Harvard Chan School, said many of these chemicals are endocrine disruptors, which can interfere with common metabolism, the immune system, and fertility in men and women. “Our exposure may be at very low levels,” he noted. “But there is data suggesting that even that can have an effect on humans.”

Tamarra James-Todd, professor of environmental reproductive and perinatal epidemiology at the Harvard Chan School, added that certain populations — including pregnant women and minorities — are especially at risk. She said chemicals used in cosmetics and industrial products are related to glucose disruption, which can lead to Type II diabetes that pregnant women can pass on to their children.

“We’ve found that Hispanic women and non-Hispanic black women have larger concentrations of these chemicals. Black women also have a prevalence of preterm birth that’s twice as high as white women.” She also noted that about a quarter of pregnancies currently evince some complication, including preterm birth and gestational diabetes. “This is not trivial.”

Another vulnerable group is teenage women, said Nneka Leiba, deputy director of research for the Environmental Working Group. That’s partly because teens tend to use more cosmetics and other personal products than adult women, she said. The average teen uses 17 personal-care products daily (versus 12 for adults), which subjects her to perhaps 180 chemicals.

“We tested for 25 chemicals in teenage girls and found that 16 of them were present, and these were the ones associated with endocrine disruption. And what’s going on during adolescence? There’s complicated hormonal signaling that guides development of the brain and the immune system.” Even if teens don’t use those personal products, they may encounter the same chemicals through waterproof clothing or nonstick cookware. “It really is ubiquitous.”

Speaking via Skype from Europe, Pete Myers, CEO and chief scientist of Environmental Health Sciences, focused on the obstacles to effective regulation. Myers, who has been working on the issue since the ’80s, emphasized that endocrine-disrupting chemicals are a recognized danger, classified by the World Health Organization as a global health threat. Yet they aren’t regulated in the United States as such.

“There are many reasons regulation has advanced slowly, but the big one is money,” he said. “If regulators were to act on the science we have in hand now, it would require multiple products to be taken off the market. There are games that people play to make that not happen. The money [generated by those products] pays for a lot of lawyers. We face a system that makes the movement of science into regulation move very slowly, and in some cases backwards.”

Still, consumers aren’t entirely powerless. Leiba’s organization, the Environmental Working Group, maintains a database of products that are rated for their chemical safety. And she noted a positive sign in last year’s rewriting of the Toxic Substances Control Act, which was introduced in the ’70s and was badly in need of an update. In 2016, it was expanded to give more regulatory power to the Environmental Protection Agency, but Schumaker pointed out that the Act’s future is uncertain under the new president. Leiba said that the Senate’s recent approval of Scott Pruitt to lead the EPA may not be a good sign, since Pruitt fought against regulations on toxic emissions when he was attorney general of Oklahoma.

All four panelists agreed that the one thing that was most needed was stronger government regulation, but nobody seemed optimistic it would be coming anytime soon. “What I’d look for,” Myers said, “is a package of policies that move us into a world in which moms don’t have to be chemical engineers to go shopping for their kids.”