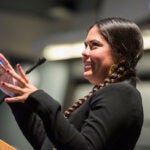 “I’m dealing with a lot of uncertainty,” said Ilian Meza-Peña ’17, whose eligibility under the Deferred Action for Childhood Arrivals (DACA) policy is due to expire next December. “Is the University going to add more mental health counselors who are aware of the cultural issues?”

“I don’t have a passport. I was smuggled over the border to Turkey,” explained Aref Ebrahimi, a candidate for an A.L.B. from the Extension School, a special student at the Graduate School of Arts and Sciences, and a researcher at Harvard Medical School, as well as a refugee from Iran. “What’s the easiest way to deal with this?”

These were only two of the questions raised by members of the Harvard community on Wednesday afternoon when representatives of the Harvard International Office, the Office of the Vice Provost for International Affairs, and Harvard Law School’s Immigration and Refugee Clinic held a town hall to offer information and perspectives in light of the new Washington administration’s executive orders on immigration and refugees. A number of Harvard’s Schools have been holding similar sessions for their concerned students.

Citing President Drew Faust’s recent “We Are All Harvard” statement, distributed to the University community, Vice Provost Mark C. Elliott opened the meeting. “The University is deeply committed to being an open, welcoming, and deeply international community,” he said. With approximately 10,000 international students and scholars, the largest number in any U.S. university, Harvard is “frustrated and distressed by the effect that this order is already having on our community,” he said.

Elliott said Harvard had been active even before the latest executive order was signed, holding meetings “at the highest levels,” not only among University officials, but with officials from other universities and institutions across the country.

Elements of that action, as well as practical advice, were then presented by fellow panelists Maureen Martin, director of Immigration Services at the Harvard International Office, and Jason Corral of the Law School’s Immigrant and Refugee Clinic, who had originally been hired to represent students who are undocumented, with DACA support.

With the help of a Powerpoint demonstration, the panel first broke down what three relevant executive orders actually say. One temporarily suspends the issuance of visas abroad and the entry into the United States by people from seven predominately Muslim countries (Iran, Iraq, Syria, Yemen, Somalia, Libya, and Sudan). Another order temporarily suspends the admission of all refugees and calls for an indefinite suspension of admission of refugees from Syria. And one calls for the immediate construction of a wall on the U.S.-Mexico border and for reinforcement of internal immigration enforcement.

Some implications of these orders are clear. “People from those seven countries should not try to travel outside the U.S.,” said Martin. She also noted that rumors of other countries being included in the ban, or in a future one, have made many foreign scholars leery of travel. “Everybody is anxious, and we understand that. We’re here to help you work through it.”

The international office, she said, has been in touch with all the scholars from overseas who have registered that they are traveling — and recommends that all members of the University community who are considering travel register their plans. In addition, the Immigration and Refugee Clinic has been providing information and advice.

Executive orders, explained Corral, cannot make new law. In fact, if they contradict an existing law, that “law trumps the order,” he said, to laughter. This order of precedence is the basis for legal challenges to the orders, as are the existing visa and DACA regulations themselves. For example, in some cases, visa applications must be considered within a certain time period. “If they take longer, they are in violation of established law,” said Corral.

A checklist of documents that international students should carry if traveling was projected: a passport, if possible, or a green card, and a visa with a valid travel signature and valid travel stamp. Other suggested items include a letter from Harvard attesting to one’s status in the University community, a resume or CV, and the phone number of someone at Harvard. (While the director of a scholar’s specific program was mentioned as a contact, it was also pointed out that the University’s travel assistance number, 617-998-0000, is staffed around the clock.)

“Even for domestic travel,” suggested Corral. “I’d be very cautious and travel with information.”

The panel then took questions that ranged from specifics about possible changes in H1-B and OPT visas to options for housing after graduation. Questions about travel for emergencies, such as a death in the family, or for formerly routine conferences or interviews, were answered with candid concern. “Over-document,” suggested Corral. “Come talk to us first,” advised Martin.

As a Baha’i, Ebrahimi counts as a religious minority, which should exempt him from some of the latest orders’ impact. Still, citing his interest in pursuing a career in global health, he remains frustrated and confused. “I’m grateful for the opportunity,” he said. “But this makes the U.S. a big prison for me.”

After the roughly 90-minute meeting, Meza-Peña still had questions. “I feel good about Jason being hired,” she said. Still, she worried that some of her issues hadn’t been addressed. As she was explaining, a clinical social worker from the University Health Services approached her, ideally to continue a useful dialogue.