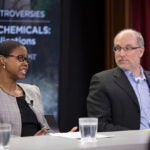 On Wednesday, Collins brought his high-achieving design — along with enthusiasm and a couple of boxes of planes — to the Graduate School of Design (GSD).

Collins, whose plane set the 226-foot record for distance in 2012, offered a workshop that used paper airplanes as a teaching tool. He talked to a group of students about making the planes, including design, goals, and materials. As he outlined the process, he encouraged students to engage in behavior that would have gotten their high school selves sent to the principal’s office: making and flying paper airplanes in class.

“When thinking about design solutions, it has to work,” Collins said. “If you can wad up a piece of paper and throw it farther than your paper airplane, your plane sucks.”

Collins’ talk touched on glide ratios, center of gravity, and center of lift, the boundary layer, and the Magnus effect. He drew on his experience with origami to introduce students to the complicated folds of their first plane, which had a thick hexagonal front. He talked about how an additional fold here or there can shift the center of gravity and make a plane fly better, or how a tweak of a wing’s trailing edge can prevent a nosedive. Along the way, he offered an inside view of the process behind designing 75 original planes.

The workshop and previous night’s lecture at Gund Hall were part of the new Master in Design Engineering (MDE) program offered jointly by the GSD and the John A. Paulson School of Engineering and Applied Sciences (SEAS).

“My goal was to bring an outside-the-box thinker with a nontraditional path to speak to our students,” said Tarr Family Professor of Bioengineering and Applied Physics Kevin Kit Parker, who arranged Collins’ visit. “Innovation comes in many different forms, not just through formal education. But before innovation one must live a creative life. John certainly lives a creative life.”

Martin Bechthold, Kumagai Professor of Architectural Technology and MDE co-director, said the program is intended to train students to analyze and solve problems that span an array of disciplines and whose scale ranges from the global to the individual. One challenge, he said, is that data on these kinds of problems are often hard to find.

During their two years of study, students will work in multidisciplinary teams in which collaboration will be key to success, Bechtold said.

Collins, a former television producer and director whose childhood passion for paper airplanes never faded, set the world record by taking a different approach from the previous champion, who flew a version of the basic dart that every kid knows how to make. Rather than the dart’s brute-force approach, Collins aimed for just the right float.

In a conversation after the classroom session, Collins shared one of the most important lessons from his achievement: You may fail on any given attempt, but you’re never defeated until you quit. He also offered a pointer to paper plane aficionados frustrated by planes that don’t fly right: Don’t fold another; tweak the plane you have.

“Treat every flight like a test flight, observe what it’s doing,” Collins said. “You can take a poorly folded plane and make it fly OK.”

During the workshop, students made three different flying forms: a plane, a flying ring, and a tumbling wing that spins as it floats on the updraft from a rectangular piece of cardboard moving at walking speed.

Grad student Seungkuk Ahn said it was interesting to take a scientific approach to such a simple-seeming problem.

“This is really fun, we learned a lot of design criteria with ease,” Ahn said. “The best way to learn is in person.”