On stage: Nights of ‘the Iguana’ 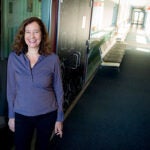 It’s a homecoming of sorts for director Michael Wilson as he presents playwright Tennessee Williams at the American Repertory Theater (A.R.T.) this month, guiding an all-star cast through what was the writer’s last great critical and commercial success.

First performed in 1961, “The Night of the Iguana,” explores familiar Williams territory: sex, desire, dysfunction, and despair. The play follows defrocked-preacher-turned-tour-guide T. Lawrence Shannon on a trek through Mexico with travelers from a Baptist women’s college. At a remote hotel run by Shannon’s friend Maxine Faulk, he encounters hotel guest Hannah Jelkes, who helps him confront his longtime demons.

“It’s not a flawless play, but it’s a great play in what it achieves in its storytelling and its exploration of big themes,” said Wilson, whose first job after college was as the A.R.T.’s house manager in 1987. There’s “also that undeniably, incredibly intoxicating power Williams has to transport an audience through setting, mise en scène elements, and really grabbing the ideas of desire and living fully.”

Such talented and veteran actors, said Wilson, bring subtlety and sophistication to their performances.

He cautions audiences not to be fooled by Jones’ portrayal of the play’s frail, elderly poet Nonno. He’s a deft actor simply playing a character, and still a demanding presence whose years of theater and film experience add layers of nuance to this somewhat quieter performance, said Wilson.

“It’s great to see him play a part that’s as much about listening as it is about talking,” said Wilson. Still, every time Jones speaks in that famous resonant basso, added the director, “the whole cast just looks.”

Ashley, a longtime friend to Williams, had her breakout Broadway performance in 1974 when she portrayed Maggie in the playwright’s “Cat on a Hot Tin Roof,” and has since been in numerous Williams plays. As such, the actor brings “authenticity and authority,” to “Iguana” said Wilson. “She knows Tennessee’s music and rhythms, and she knows exactly how to drive through them.

“You feel Tennessee laughing on her shoulder,” he added.

Ashley also knows Wilson well. In 2001, Wilson led the Hartford Stage’s production of “The Glass Menagerie,” with Ashley in the role of faded Southern belle Amanda Wingfield. The show played at the A.R.T. and went on to win an Elliot Norton Award. The A.R.T. mounted an acclaimed production of “Menagerie” in 2013 that went on to a successful Broadway run.

Plummer also knows this landscape well. She and Wilson have done three Williams plays together. Plummer also starred in a 1983 Broadway production of “The Glass Menagerie” with Jessica Tandy. While Plummer knows what Ashley, Vivien Leigh, Geraldine Page, and Barbara Bel Geddes have achieved in leading Williams’ roles, what’s fun to watch, Wilson said, is Plummer “doing it her way.”

“She’s been very effective, and really arresting the audience’s attention.”

The director called Delany, winner of back-to-back Emmys for her work on the television drama “China Beach,” “a damn good stage actress.”

“From the time I talked to her on the phone when we were exploring her coming out here to do this,” recalled Wilson, “I knew she had the right chutzpah, energy, guts, courage, and humor to play Maxine.”

Of Heck, the play’s fallen preacher, Wilson said, “He’s becoming one of the main actors of his generation, and this Shannon is going to catapult him out of the earnest Gary Cooper kind of character into more of a James Dean bad boy.”

A Southerner himself, Wilson knows Williams’ works inside and out, producing an ambitious marathon of them as artistic director of the Hartford Stage from 1998 to 2011, regularly staging well-known plays alongside lesser-known one-act works and more abstract creations.

On a break from A.R.T. rehearsals, Wilson explained his longtime love for Williams’ repertoire.

He was also profound. Williams tapped into the human condition like no other, said Wilson, and his themes still resonate.

“With what’s happening in our world today, where law-and-order governments seem to be on the rise not just in the United States but in other countries throughout the rest of the world, anything that has ambiguity of any sort — moral, sexual, gender, thought — there’s really not going to be a lot of room for that. And that’s dangerous to people who are sensitive and empathetic,” said Wilson. “And I think it’s just yet another incredible way in which this play is prescient and vitally relevant today.”

Wilson first worked with Airaldi more than 20 years ago at the A.RT. The director has a keen eye for Williams’ sensibilities, said Airaldi, and appreciates the playwright’s ability to combine the type of lyricism found in Shakespeare with the kinds of compelling silences favored by playwrights such as Anton Chekov.

Airaldi, who has been in a number of Wilson-directed Williams productions over the years, said he often uses scenes from Williams’ works in his Harvard acting classes. The writing, he said, combines “everything that an actor needs to do.” It’s the language, said Airaldi, who plays travel company representative Jake Latta in the third act. But it’s also “what’s under the words, the silences around them.”

Airaldi said that Williams “shows such a compassion for the misfits in life. … Most of us in theater, if you dig deep enough, you’ll find a misfit somewhere.”

For a further window into Williams and his work, audience members can check out the small display in the Loeb Drama Center’s lobby. The exhibit will feature material from the collection of Williams ephemera and manuscripts housed at Harvard’s Houghton Library.

“We hope the display will give audiences a sense of how long the development process was for ‘Iguana,’ ” said Annabeth Lucas, the A.R.T. Institute’s production dramaturg, “as well as a little insight into Williams’ tendency to constantly revise his own work.”

“The Night of the Iguana” will play at the Loeb Drama Center on Tuesdays through Sundays, Feb. 18 through March 18. Tickets are available here.