Record number of applicants is up 1.2 percent from last year

Applications for admission to Harvard College rose to nearly 40,000 this year, with a record 39,494 students applying, up 1.2 percent from last year.

“Interest in Harvard has remained strong even as the number of high school seniors has been leveling off in the U.S. in recent years, part of a long-term plateauing that will include declines in the Northeast and the Midwest,” said William R. Fitzsimmons, dean of admissions and financial aid. “As most students — about 80 percent — go to college within 200 miles of their homes, outreach that redoubles our efforts close to home and continues our national and international recruitment will be necessary to maintain the excellence of our student body.”

Fitzsimmons said, “Three factors stood out this year: Harvard’s innovative and comprehensive financial aid program, new developments in the humanities, such as the theater, dance and media concentration, and another surge in the number of students interested in computer science and the opportunities at the Harvard John A. Paulson School of Engineering and Applied Sciences.”

Prior to the start of the Harvard Financial Aid Initiative (HFAI), fewer than 20,000 students applied for admission. “The excellence and diversity of the student body have reached unprecedented levels since the start of HFAI,” said Sarah C. Donahue, Griffin Director of Financial Aid. “The majority of Harvard students receive need-based aid, and their families pay an average of only $12,000. Students are not required to take out loans.”

Since launching HFAI in 2005, Harvard has awarded nearly $1.6 billion in grants to undergraduates. Over that time, Harvard’s annual financial aid award budget has increased more than 114 percent, from $80 million in 2005 to more than $172 million in 2016.

The majority of undergraduates receiving financial aid pay just 10 percent of annual family income, and this standard holds for families earning up to $150,000 per year. Families with higher incomes can also receive need-based aid, depending on individual circumstances, including other children in college or unusual medical or other expenses.

Today one in five Harvard undergraduates comes from a family earning less than $65,000 a year, and their families pay nothing toward the cost of their education. These students now also receive a $2,000 start-up grant that helps support move-in costs and other expenses incurred in making the transition to college. 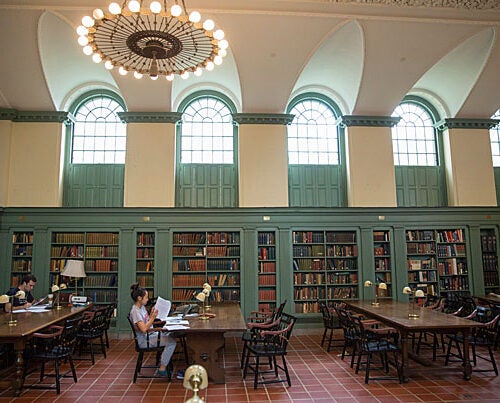 Countering a national trend, interest in the humanities has been rising at Harvard. This year, applicants with an interest in the field saw a 3 percent increase from last year’s applicant pool. In addition to the opening of the revitalized Harvard Art Museums, myriad programs sponsored by the Office of the Arts and the American Repertory Theater and the new theater, dance & media concentration have created excitement and interest.

“I have been astounded by the number of secondary school students who have called, emailed, or visited me from all over the country, the world even, to inquire about TDM since we opened our doors,” said Deborah Foster, director of undergraduate studies in theater, dance & media. “These students tell me they are drawn to Harvard by the opportunity to pursue a top-notch liberal arts education along with strong, almost conservatory-like training in theater and dance. They are thrilled by the prospect of truly integrating the history and theory of theater and dance with the serious practice of these art forms.”

The Harvard Paulson School and the computer science concentration also continue to drive student interest in Harvard. “We saw a 12.3 percent increase in the number of students intending to concentrate in computer science, reflecting the strength and breadth of our computer science faculty,” said Marlyn McGrath, director of admissions.

“As a senior in computer science, it is easy to see the high level of excitement for CS and engineering as … membership in clubs, such as Women in Computer Science, has been growing. We are beyond excited to welcome the newly admitted class and hope they can find a home at Harvard and potentially within SEAS,” said Maria Stoica ’17.

The number of women applying to the College this year increased by 2.5 percent, climbing to 49.9 percent of the total pool. In addition, the numbers increased for all minority groups. Geographical distribution and economic diversity were both similar to last year’s pattern.

The admissions committee’s decisions will be released to applicants on March 30. Admitted students will be invited to visit Cambridge from April 22 to 24 for the Visitas program. Students have until the national reply date of May 1 to make their final college choices.