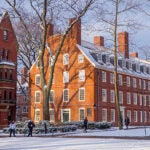 Harvard Professor Michèle Lamont has been named winner of the 2017 Erasmus Prize, which recognizes individual or group contributions to European culture, society, or social science.

In awarding the prize, which comes with a grant of €150,000, or $159,000, the Erasmus Foundation cited Lamont’s “devoted contribution to social science research into the relationship between knowledge, power and diversity.”

“I’m deeply moved to have been chosen for this award. I have tremendous admiration for the past recipients who have defined the social sciences of the 20th century,” said Lamont, a professor of sociology and of African and African American Studies, the Robert I. Goldman Professor of European Studies, and director of the Weatherhead Center since fall 2015.

“Erasmus believed that knowledge would help improve understanding among people,” she said. “Particularly in our challenging times, I hope that in its own way, my research could perhaps help us in a similar direction.”

Lamont has played a significant role connecting European and American areas of research within the social sciences. In 2002 she co-founded the Successful Societies program at the Canadian Institute for Advanced Research, for which she examines the cultural factors and institutional structures that create more resilient societies. Her work has shown that diversity often leads to more vigorous and productive relationships in society and the academic world.

She was recently voted president of the American Sociological Association.

At Harvard, Lamont’s research focuses on how cultural conditions shape inequality and how stigmatized groups find ways to preserve their dignity. Her academic interests center on how class and ethnicity determine people’s perceptions and minority well-being influences the success of the wider society. Her groundbreaking international comparative research has shown that disadvantaged groups can achieve new forms of self-esteem and respect.

Lamont has written dozens of books and articles on such subjects as culture, social inequality and exclusion; racism and ethnicity; institutions and science. Her most recent book, “Getting Respect” (2016), addresses the ways stigmatized groups respond to discrimination. Her previous book, “How Professors Think” (2009), examined how the academic world determines what knowledge is valuable.