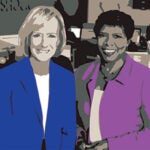 At a Meeting of the Faculty of Arts and Sciences on Feb. 7, 2017, the following Minute was placed upon the records.

Edward Louis Keenan, Jr., called “Ned” nearly universally, died on March 6, 2015. Excepting two years in Leningrad, he spent his entire career at Harvard. This declaration stands true even including nine years in Washington, where from 1998 to 2007 he directed Dumbarton Oaks.

Ned was a consummate Harvard man—but in his own distinctive fashion. While thoroughly Crimson, he clung proudly to his background. Born on May 13, 1935, in Buffalo and brought up in nearby Orchard Park, he described himself as a “hick from the boondocks of western New York.” When he entered the College, it remained heavily white, male, and privileged. Owing to his rural roots, he regarded himself then as an outsider. He might still do so today.

He matriculated, 18 years old, in 1953. In that year, Joseph Stalin died, Vyacheslaw Molotov (of cocktail fame) began a second tour as Foreign Minister, and Moscow exploded a hydrogen bomb. Thereafter Ned stayed in Cambridge continuously as an undergraduate (honors A.B. in Slavic in 1957), graduate student (Ph.D. in 1965), and junior and senior faculty member (tenure in 1970), apart from that sojourn in the Soviet Union, until he went to Dumbarton Oaks.

Ned’s craft was history, and his specialization was medieval Russian. Within his field, he became prominent and controversial for studies that sought to analyze and ultimately to disprove the supposed authenticity of major sources in East Slavic history. Two volumes, more than three decades apart, argue that two major documents, one a set of correspondence and the other an epic tale, were not medieval at all, but seventeenth- and eighteenth-century, respectively. The first book, questioning among other things Ivan the Terrible’s writing skill, provoked a fierce polemic across Cold War borders with a leading Soviet expert on Russian history. Ned also published many seminal articles (the first appeared in 1958) on the political and social structure of Muscovy. For example, he demonstrated that the ruler was envisioned not as an all-powerful dictator but as a referee at the center of a complex, consensus-driven power network. In quantity, his bibliography extended to 22 pages already by 1997.

If Ned’s discipline was history, his principal tool was language. His linguistic abilities were renowned, notably his native-level fluency in Russian, but also his facility in Spanish, an early love of his. Émigrés from the Soviet Union marveled at his command of their principal tongue and a quiver of other Slavic ones, which he maintained even after being ejected and not allowed to return. The list could be extended considerably, since that two-year stay was for studying Uzbek and Turkmen. Beyond ease in acquiring even such difficult languages as Arabic and Farsi, Ned had flair for insightful historical analysis of texts as works of words. He loved to find patterns, especially ones that enabled him first to test and then to best authority. He burnished this knack for textual interpretation by what he learned from Roman Jakobson, his legendary mentor in the Slavic Department. All these strengths he brought to bear in lecture halls and seminars. A charismatic teacher, he developed almost a cult following. Through his numerous students, he helped to shape his fields for generations to come.

Ned was a repeat offender in university service, with a terrifying rap sheet. For instance, he weathered more than a half dozen stints as associate director and director of what is now the Davis Center, master of the present-day Pforzheimer House, dean of the Graduate School of Arts and Sciences, and director of the Center for Middle Eastern Studies. He fulfilled these roles in phases of wrenching transitions (think of the early seventies and proceed to the end of the last century), and he handled them adroitly. In all spheres, Ned concealed formidable skills in negotiation by posing as clueless peasant among city slickers. If as a scholar Ned inspired wonder for his grasp of languages, he earned administrative kudos for belonging to the first generation of early adaptors. He switched to personal computers long before colleagues even asked secretaries to do the same for them.

When Ned’s recidivism in leadership roles moved the powers that be to consign him to a remote maximum-security unit, they settled upon Dumbarton Oaks. Upon taking this final assignment, at his alma mater’s elegant outpost in Georgetown, he deployed his hard-won background to excellent effect. He rationalized a reporting structure he called “a bowl of spaghetti.” Among multifarious contributions, he oversaw a capital renewal project that remade the main campus. With pride and melancholy, Ned joked that the new library would be the last in North America. The architect was the celebrated Robert Venturi. Obtaining permissions was a gauntlet told vividly in an interview in Dumbarton Oaks’ virtual archives. Ned also acquired a former home of Elizabeth Taylor, to become the director’s residence. His toils brought the research center into the twenty-first century, and many will benefit from his foresight for decades.

A memorable raconteur, Ned expressed himself colorfully. Often he came forth with formulations that sounded proverbial. In fact, this interest reached back to his undergraduate thesis on Russian sayings. All the same, listeners might often be nagged by uncertainty as to whether the original of his wording was Russian, another foreign language, or his own creation.

Ned Keenan was himself an original, with strong and shrewd convictions as a historian, faculty member, citizen, and human being that he expressed with memorable wit. He will be much missed by all those who had occasion to benefit from his skill, erudition, and humor. With his death, we have lost a person who not only liked to talk with a sly twinkle in his eye about where the dog lies buried but also knew the exact locations of many canine skeletons that will now pass forgotten.

After retirement in 2008 he moved mainly to Maine, where he lived on Deer Isle with his cherished second wife Judith (“Judy”). She survives him, as do all but one of his four sons and both her daughters.