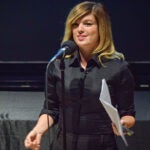 By most indications, the election of Donald Trump was expected to incite a sharp rollback in stock prices. But investor anxiety before the election was tempered by the fact that most pollsters were predicting an easy victory for Hillary Clinton. Everything changed, however, on Nov. 8, when Trump pulled off an incredible upset.

What happened next surprised most everyone: The stock market ricocheted upward with a bang. The Dow rose 257 points on the day following the election, and more than 1,400 points by year’s end.

But while the market’s ascent is well documented, a deeper look shows a more complex picture. A new Harvard Kennedy School (HKS) faculty research working paper reveals how speculation on the president’s future economic policies has had widely disparate impacts upon different business sectors. The paper is co-authored by Richard Zeckhauser, the Frank Plumpton Ramsey Professor of Political Economy, and was published Feb. 24 in the Centre for Economic Policy Research’s policy portal VoxEU.org.

“The ‘Trump Rally’ isn’t that unusual: The overall market tends to rise after elections historically,” the authors write. “What is surprising about the post-election rally is its magnitude, and its sharp difference from the significant decline that most forecasters had predicted if Trump won the election.”

Zeckhauser and co-authors Alexander F. Wagner, an HKS Ph.D., and Alexandre Ziegler conclude that expectations about Trump’s stances on taxation, trade policy, and regulation have been the major drivers in market performance in several significant business sectors.

“Heavy industry (which Trump has promised to resurrect) and financial firms, which he has said he would deregulate, performed well,” they write. “By contrast, health care, medical equipment, and pharmaceuticals lost dramatically (presumably due to the expectation that Obamacare would be dismantled or at least significantly altered), as did textile and apparel firms, reflecting their significant dependence on imports, which Trump has vowed to strongly discourage.”

While the markets have continued rising to all-time highs in the new year, Zeckhauser and his co-authors are dubious about making long-term predictions.

“Important elements of the short-term expectations about policies and their effects on company fortunes, whether for the day beyond or the seven weeks beyond Election Day, may well reverse themselves when actual policies take shape,” they say. “Whatever one’s politics, the initial days of the Trump presidency lend confidence to one prediction: Significant policy surprises, and significant changes in company stock prices, lurk in the near- and not-so-near term future.”