A close reading of Elizabeth Bishop 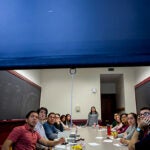 A new book on Elizabeth Bishop offers readers a revealing look at how the professional and private lives of one of the greatest American poets of the 20th century often converged.

“Elizabeth Bishop: A Miracle for Breakfast,” published this month by Megan Marshall ’77, winner of a Pulitzer Prize in 2014 for “Margaret Fuller: A New American Life,” is informed by both a fresh trove of Bishop’s letters and the author’s own experience — the young Marshall took a poetry composition seminar taught by Bishop. Though never comfortable at the head of a classroom, Bishop imparted lessons that made a lasting impression on her future biographer, including the idea that poetry cannot be taught.

Marshall, a former fellow at the Radcliffe Institute for Advanced Study, spoke with the Gazette about her encounters with Bishop in life and on the page.

GAZETTE: Why did you decide to write a book about Elizabeth Bishop?

MARSHALL: She is very much in the public eye as a personality, and her poetry is well known, but there hasn’t been a biography for over two decades. I had actually set out to write a short book, more an appreciation, because I had known her, and that seemed to call for a different kind of book, not a straight biography. But when I started in on the research, I learned that there was new material available that really opened up her life. You could understand periods of her life that weren’t well documented before. Some of this material, groups of letters that were saved by her much-younger partner, Alice Methfessel, and released after Alice’s death in 2009, included their own correspondence, a record of an ardent late-life love for Bishop. And there was a series of letters Elizabeth wrote to her psychoanalyst in 1947, with recollections of her very difficult early childhood as a virtual orphan, as well as more delightful accounts of early passions for girls at the Walnut Hill School. It’s clear from these letters that Elizabeth really didn’t have any question about her sexuality from an early age, and that’s something that we could only guess about before.

In addition, I love writing about women, particularly New England women — Elizabeth Bishop was born in Worcester, and grew up mostly in Massachusetts. And I thought it would be a challenge to leap into the 20th century. Then there was this notion that I could somehow be involved in the narrative myself. Unlike my other biographies, once I saw I would need to cover all of Bishop’s life, I had a clear vision of the shape the book would take from the outset — a six-chapter structure with titles drawn from the end words in Bishop’s sestina “A Miracle for Breakfast,” which is also the title of my book, alternating with brief memoir passages, dated by my encounters with Bishop as a Harvard student. It all fell into place.

GAZETTE: Can you tell me a little bit more about your decision to insert yourself in the narrative?

MARSHALL: In part, I just felt it would be dishonest if I didn’t somehow indicate that I knew Elizabeth Bishop, and there’s also the fact that I have had a bit of a yen to write about that time at Harvard. Then I realized in the process of writing that what I wanted to do was to revive the importance of poetry in everyday life, to show how poetry can be meaningful even when you are not a poet or a literary scholar or critic. That is sort of how my autobiographical portion of the narrative functions. I am recalling what I loved about poetry, my efforts at poetry, and my ambition as a poet. I didn’t become a poet but I still love poetry. There are many poems that come up in the book but they are not all Elizabeth Bishop poems. There’s a Frost poem, there’s a Robert Penn Warren poem, and you see how poems can become life-sustaining in ways that aren’t taught in class. Then there’s the way the poems function in the biographical sections about Bishop, which situate them in her life. The reader sees what it is for the poet to actually come upon an idea for a poem and realize it. I guess I felt Bishop’s was a life story that could inspire readers to love poetry again or to learn to love it when they hadn’t loved it before.

MARSHALL: She was a quiet person and reserved and didn’t seem very comfortable leading the class I took with her. You had to wait for her to warm up and to find something that would get her to relax. A lot of times it would be some sort of recollection. I have a vivid memory of her talking about the poet Marianne Moore and a line that Moore stole from her. In truth that was something Moore did, she picked up dialogue and used it in her poems. Bishop told this story that went back to the 1930s, that’s how long she had been carrying this annoyance. But if she could kind of lose herself in the telling of a story like that, she relaxed a lot more. Later, at the end of the semester, she invited our class to a party at her apartment at Lewis Wharf — a first for her. I learned through research that she’d liked our class, thought we were bright. There [at the party] I saw a very different woman, much warmer; she’d invited Alice and some younger poets. She was herself there, and I’m glad I had the chance to see her at ease among friends.

GAZETTE: Did you take a particular lesson away from her class?

MARSHALL: Oh yes. I wrote in the book that she began the class by saying she didn’t think that poetry could be taught. When I’ve mentioned this to other writing teachers lately they say “That’s terrible, what an abdication of responsibility,” and “She must have been lazy.” But I didn’t take it that way at all, and her words stayed with me. I felt as if she was saying, “You have to live your life and write the poems that come to you and find your own way to do it.” She couldn’t tell us how to do it and that actually seemed to make a lot of sense to me. It seemed very honest and I appreciated it.

GAZETTE: In the book you talk about her reading one of her works during a class you were taking with Robert Lowell. What was that like?

MARSHALL: There’s a wonderful quotation in her memoir of Marianne Moore in which she recalls what it felt like to read Moore’s poems for the first time in college: “I hadn’t known poetry could be like that.” And I had exactly that feeling listening to Elizabeth Bishop read, because the poetry that we were trying to write, under the influence of Robert Lowell, was confessional, very openly autobiographical. And here she read “Poem,” which was in a certain way autobiographical but not revealing of any particular details of her childhood. It was about “life and the memory of it,” a line in the poem. She’s known for being fairly straightforward, not fancy, in her verse. There is a lot of interesting vocabulary, but there is also a lot of plain talk, along with vivid description and deep insight into the human condition. She said that in a poem she wanted to show “a mind in action,” and she could do that without melodrama or self-revelation. Poetry is “thinking with one’s feelings,” she once said.

GAZETTE: In the book you also quote one of Bishop’s letters to Robert Lowell in which she writes, “Oh heavens, when does one begin to write the real poems.” What do you think she meant?

MARSHALL: The real poems, one could say, were the “Geography III” poems. There’s a consensus that they help you read the earlier poems. But it also speaks to this sense of there being more to say and more to do and more to imagine and that she was very much engaged in the process of poems all the time, that they were in her head or jotted down in her notebooks and they weren’t finished and that was probably a frustration. She has poems that she started and didn’t finish for 20 years. She was never not in it.

GAZETTE: You have a reading sponsored by the Woodberry Poetry Room coming up on Feb. 27. What will it be like for you to be back at Harvard reading your own work?

MARSHALL: I feel really happy to be invited to read at Harvard by the Woodberry Poetry Room. I was in there as an undergraduate listening to the recordings and it was just the heart of the poetry scene for students and I am sure it still is. Their Listening Booth website is such a resource nationally, and internationally, for these historic recordings of so many eminent poets reading their works, it’s just kind of a miracle. This reading is going to be a homecoming, and so appropriate for the book, which began for me at Harvard in the 1970s when I met and studied with Elizabeth Bishop at the end of her life.

Marshall will present passages and reflection from her new book at 6 p.m. Feb. 27 at the Edison Newman Room in Houghton Library.