Trials for a global university 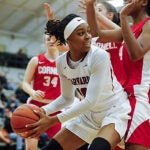 Women’s basketball gets expert advice — and they win

With travel to U.S. banned from some nations, Harvard moves to support members of its international community

The Trump administration’s executive order banning refugees and immigrants from seven majority Muslim nations from entering the United States for at least several months has stirred a hornet’s nest of concern internationally, including at Harvard, as a global university.

Harvard President Drew Faust, along with deans from across the University’s professional Schools, issued strong statements over the weekend supporting international students and faculty. Echoing a turbulent response to the policy across much of the nation, some Harvard students, faculty, and staff organized demonstrations and campus discussions in protest.

Harvard officials have scheduled a town hall session on the travel issue for Wednesday at 4 p.m. in Science Center B. Also, members of the Harvard  Immigration and Refugee Clinic program at the Law School will address a noon town hall at the School, in a location to be determined.

At least two Harvard affiliates have been barred from entering the United States.

Faust sent a letter to the Harvard community on Sunday afternoon, underscoring the University’s ongoing commitment to internationalism, and the pivotal role that the presence of scholars and students from other nations plays in helping Harvard and other American institutions to thrive.

“It fuels the capacities of universities to spur innovation, to advance scholarship and scientific discovery, and to help address society’s hardest challenges,” Faust wrote.

“In times of unsettling change, we look toward our deepest values and ideals. Among them is the recognition that drawing people together from across the nation and around the world is a paramount source of our University’s strength.”

Her letter also highlighted Harvard’s support of the DREAM Act, an acronym for the Development, Relief, and Education for Alien Minors, and the immigration policy known as the Deferred Action for Childhood Arrivals, as well as the work being done by the Law School’s Immigration and Refugee Clinic program in support of undocumented students.

She also unveiled a plan for Harvard to appoint a full-time Muslim chaplain. Under the plan, which was the result of months of internal discussion as well as a longtime goal of Muslim students and alumni, the search for a chaplain will be led by a University-wide committee of students, faculty, and staff chaired by Harvard Divinity School Professor Ousmane Kane.

“I think it’s really very important and timely, particularly since the Muslim community and the students feel a great sense of marginalization or persecution with what is happening” nationally, said Kane, Prince Alwaleed Bin Talal Professor of Contemporary Islamic Religion and Society.

Kane said the committee would seek someone who can support members of the Muslim community at Harvard and also enlighten the wider community about the Islamic faith. “To have that person as a staff member of the University shows its commitment to enlightening people about Islam,” said Kane, adding, “The fact that the president is establishing this position is a very strong statement.”

Halah Ahmad, a Harvard senior and former president of the Harvard Islamic Society, said creating the new position was a welcome step.

“We have felt for a long time that there is just a spiritual vacuum and lack of institutional support for Muslims at Harvard,” said Ahmad, adding that the new chaplain will help make the case “not just for the Muslim community but for the value of religious life on campus more broadly.”

Jonathan Walton, Plummer Professor of Christian Morals and Pusey Minister in the Memorial Church, and a strong supporter of the new chaplaincy, said Muslim students at Harvard “bear a heavy burden of religious intolerance and ignorance. A full-time Muslim chaplain can serve as a steady and comforting presence, helping students to navigate the challenges of our current political climate at this formative juncture in their lives.”

As the federal policy change took hold, the Harvard International Office reached out to all international scholars and students in the University community to help them understand the implications of the executive action as it rolled out, providing guidance and resources as needed. In addition, Harvard Global Support Services contacted all students and scholars in its travel registry to inform them about the policy’s implications.

“The cruelty of the executive order, its betrayal of American ideals, and the chaos and confusion it has sown have the world wondering: Is a great and generous democracy teetering toward tyranny? This, sadly, has become the central political question of our time,” said Sandel.

Harvard’s deans stayed in touch with their communities. In a note to the Harvard Business School family, Dean Nitin Nohria, himself an immigrant, said he was distressed by the decision and was working with others “as best we can to understand the implications for our community of this new order.”

“Harvard Business School, throughout its history, has welcomed students, faculty, and staff from every part of the world. We have thrived as a result of the international diversity of experiences, perspectives, and beliefs that come together in our classrooms and on our campus.”

Harvard Medical School Dean George Q. Daley sent an email to his community that struck a similar tone and emphasized the importance of being able to bring scholars from around the world together to work on “advancing knowledge and improving lives.”

“Collaboration among scholars from throughout the world contributes greatly to positive change in medicine, science, society, and humanity,” Daley wrote.

“We will do all within our power to care for one another, to protect one another, and to make our values meaningful at this challenging time,” wrote Martha Minow, the Morgan and Helen Chu Dean of the Law School. “The reality and vitality of religious pluralism stands at the center of who we are at HDS,” wrote Dean David N. Hempton of the Divinity School, who is also an immigrant. “We are a strong community,” assured Dean James Ryan of the School of Education.

“As you know, treating people differently based on their religion is antithetical to the values of the Kennedy School and the University, so this action worries me greatly,” wrote Dean Douglas Elmendorf of the Kennedy School. “We can and we must ensure that our School and the University continue to fight against bigotry and xenophobia in all their forms,” said Michelle Williams, dean of the Harvard T.H. Chan School of Public Health, and an immigrant.

“Harvard’s diversity is our strength,” wrote Rakesh Khurana, the Danoff Dean of Harvard College, in an email to students, “just as the diversity of this nation is its strength.”  Mike Smith, Edgerley Family Dean of the Faculty of Arts and Sciences, said in his email that “In this moment of uncertainty, I write to reinforce a deep commitment to our unique community of scholars that comes to Cambridge from all over the world to pursue this mission with the shared goal of making the world a better place.” Dean Xiao-Li Meng of the Graduate School of Arts and Sciences (GSAS) wrote, “Thanks to the welcoming and nurturing culture I experienced both in America and at Harvard as an international GSAS student from China, I was able to grow from a narrowly trained college graduate to someone who has been honored with the responsibility of leading GSAS, the most international School at Harvard.”

Reacting to the ban, Ahmad, whose father is a Palestinian immigrant, said she fears what the order will mean for her family and friends. She added that the outpouring of support she has seen over the past few days is encouraging, but that more needs to be done.

Labeling the executive order “sweeping in its effects and cruel in its application,” Maggie Morgan, a fellow at the Immigration and Refugee Clinical Program, wrote in an email that it potentially violated “our obligations under the International Refugee Convention, and our domestic-asylum law.” Any refugees arriving on U.S. soil are entitled, she wrote, to “credible fear” interviews to determine whether they should be permitted to remain to apply for asylum.

“To return refugees to their home countries where their lives are at risk is in clear violation of our treaty obligations, as well as our statutory law,” said Morgan. “It also places many lives at risk and prolongs suffering.”

Members of the clinic have been providing legal assistance to refugees stuck at Logan International Airport and will be hosting information sessions and know-your-rights clinics, in addition to opposing the order on policy and legal grounds.