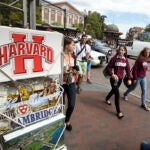 They have been a fundamental part of modern industry for more than a century, but the development of new catalysts to speed chemical processes has remained frustratingly hit-or-miss.

Now, a group of Harvard researchers is approaching the problem in an entirely new way.

Working with colleagues at several national laboratories and other partnering institutions, researchers at the Department of Energy-funded Energy Frontier Research Center’s Integrated Mesoscale Architectures for Sustainable Catalysis (IMASC) at Harvard are combining tightly-controlled experimental conditions and computational tools to develop novel methods for developing catalysts and new ways to understand the process of catalysis.

Led by Cynthia Friend, the Theodore William Richards Professor of Chemistry and Professor of Materials Science and director of the Rowland Institute, the IMASC researchers have gained new insight into exactly how catalysis works — findings that could play an important role in the design and development of more energy-efficient catalysts. The work is described in a Dec. 19 paper published in Nature Materials.

“This is really a paradigm shift in catalyst discovery,” Challa S.S.R. Kumar, the program’s managing director, said. “For 100 years or more, this was a trial-and-error process. In recent years, people are striving for a more systematic approach. Our center, through synergistic collaboration between the investigators from the partnering institutions, is establishing new principles for understanding catalytic reactions under very tightly controlled conditions, with computational modeling. These principles are used to develop catalysts that work under real-world conditions.”

With those principles in mind, researchers are currently exploring the use of nanoporous silver-gold alloys as improved catalysts.

“These catalyst materials are designed based on our model systems,” Kumar said.

To aid in the development of catalytic materials, Friend and colleagues from the Lawrence Berkeley, Brookhaven, and Lawrence Livermore national laboratories set out to observe the process of catalysis as it happens. Cutting-edge scientific tools yielded images of the atoms in the material and monitored how the composition of the catalyst surface changed. Microscopy facilities at the Center for Functional Nanomaterials at Brookhaven and the Advanced Light Source at Berkeley were essential for these experiments.

“We know we can design the catalysts and then transmit them to realistic conditions, but we didn’t know how the catalyst materials behave as catalysis is occurring,” Kumar said. “That’s a critical piece of information that has not been taken into consideration when designing new catalysts.

“What we have shown with this paper is that we now have the tools to investigate how catalysts dynamically change just before catalysis, during catalysis, and after catalysis,” he continued. “And these dynamic changes can be correlated to the activity and selectivity of the catalyst.”

Nearly one-third of the world’s energy is devoted to the chemical industry, Kumar said, so finding ways to make those processes more efficient — either by speeding them up or by enabling them to take place at lower temperatures — could yield a significant environmental impact.

“There is a huge carbon footprint left by many of these chemical processes, some of which are more than 100 years old,” Kumar said. “If we can reduce the energy budget for those processes … it could have a tremendous impact on energy usage, and dramatically change that carbon footprint. And now we have the tools to do that.”