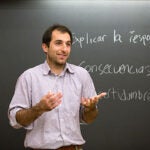 The Hasty Pudding Theatricals, the oldest theatrical organization in the United States, announced today that Golden Globe-nominated actor Ryan Reynolds will receive its Man of the Year award.

The Man and Woman of the Year awards are presented annually to performers who have made lasting and impressive contributions to entertainment. The Man of the Year award was established in 1963. Past recipients have included Clint Eastwood, Tom Hanks, Robert De Niro, Harrison Ford, Justin Timberlake, Robert Downey Jr., Chris Pratt, and most recently Joseph Gordon-Levitt, the 50th Man of the Year.

The award festivities, presented by the Related Companies, will take place Feb. 3. The Hasty Pudding Theatricals will host a celebratory roast for Reynolds and present him with his pudding pot at Farkas Hall, which has been the group’s Harvard Square home since 1888. A press conference will follow the roast.

“We’re thrilled to present Mr. Reynolds with our Man of the Year award, especially after he proved his ability to simultaneously break box office records and the fourth wall in 2015,” said Guan Chen, president of the Hasty Pudding Theatricals. “And if his headline-stealing kiss with Andrew Garfield at the Golden Globes is any indication, it looks like he’s getting ready for his roast.”

Reynolds is one of Hollywood’s most diverse leading men, seamlessly transitioning through drama, action, and comedy. He is also a producer.

Reynolds will be seen next opposite Jake Gyllenhaal and Rebecca Ferguson in the movie “Life.” He also will star in “The Hitman’s Bodyguard” with Samuel L. Jackson. In 2015, he starred in “Mississippi Grind,” “Woman in Gold,” and “Self/less.”

Other film credits include “The Voices,” “Safe House,” “The Change-Up,” “Green Lantern,” and “Buried.” Earlier, he starred in “The Proposal” and appeared in the X-Men spinoff “X-Men Origins.” DarkFire, Reynolds’ TV production company, recently sold its first two projects, the live-action comedy “Guidance” and the animated comedy “And Then There Was Gordon,” to 20th Century Fox Television.

Reynolds serves on the board of directors for the Michael J. Fox Foundation for Parkinson’s Research.

The mission of the Hasty Pudding Institute of 1770 is to provide educational and developmental support to the performing arts, encourage satire and comedy, and cultivate young talent. The institute comprises the Hasty Pudding Club (the oldest social club in the United States), the Hasty Pudding Theatricals (the third-oldest theater group in the world), and the Harvard Krokodiloes, a leading a cappella group.

For tickets to “Casino Evil,” contact the box office at 617-495-5205 or order online at hastypudding.org/buy-tickets. The show will run at Farkas Hall from Feb. 3 to March 5. The company then takes the production to New York and Bermuda.