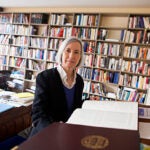 Minow to step down as Law School dean

Legendary teacher 'who wore his awesome learning lightly' is remembered

A World War II veteran who discovered a lifelong passion for Renaissance architecture while stationed in Italy, Ackerman was an acclaimed scholar of Renaissance history and the theory of architecture.

“His books were all milestones in the field — books that seem as perfectly balanced as the buildings they interpreted,” said Joseph Koerner, the Victor S. Thomas Professor of the History of Art and Architecture, adding that Ackerman’s mastery as a teacher matched his intellectual genius. “He inspired generations of undergraduates and trained many of America’s leading scholars and museum professionals.”

Born in San Francisco, Ackerman studied the history of art and architecture at Yale University before serving as part of the Intelligence Corps for the U.S. Army, translating German command messages in Italy. After the war, he was assigned to secure archives at Certosa di Pavia, a monastery in northern Italy.

Back on American soil, Ackerman received his Ph.D. at New York University’s Institute of Fine Arts, then had a fellowship at the American Academy in Rome. He returned to the United States to teach at the University of California, Berkeley, and joined Harvard’s faculty in 1960, becoming chair of the Department of Fine Arts three years later.

Alina Payne, the Paul E. Geier Director of Villa I Tatti, one of many in the department who cherished her friendship with Ackerman, described the bespectacled academic as “extraordinarily generous.”

“Throughout his long career, he was always curious, and open to new ideas and trends in research,” she said. “His mark has been felt around the world for at least half a century.”

He was a prolific author, publishing many influential books and essays over a career spanning more than six decades. Among them: “The Cortile del Belvedere,” about Bramante’s work at the Vatican; “The Architecture of Michelangelo”; “Palladio”; “The Villa: Form and Ideology of Country Houses”; and “Distance Points: Essays in Theory and Renaissance Art and Architecture.”

In 2001, he was awarded the International Balzan Prize in the field of the history of architecture, a prize he shared with young architectural historians at the Palladio Center in Vicenza and the American Academy in Rome. He received the Golden Lion for Lifetime Achievement from La Biennale di Venezia in 2008 and was appointed grand officer in the Order of Merit of the Italian Republic. He was also proud to have been honored with volunteer of the year award from the Community Learning Center in Cambridge.

David J. Roxburgh, chair of the Department of History of Art and Architecture, recalled reading Ackerman’s books on Andrea Palladio, Venetian architecture, and Rome as an undergraduate in Edinburgh, Scotland, “never thinking that one day I might meet him.”

“His books then, as now, offered an innovative vision and model for historical research. Though Jim had retired by the time I joined Harvard’s faculty, he was kind and generous to me,” he said.

Equally inspired was Koerner, who remembered a man “who wore his awesome learning lightly.” He shared a conversation he observed between Ackerman and a group of department undergraduates.

“A last question was posed to him: ‘What advice would you give aspiring art historians?’ Without missing a beat, he said, ‘Voice lessons!’ and began a mesmerizing story about his own formation, his struggle with public speaking, and the difficulty of projecting a compelling persona,” he said. “I regret terribly that we didn’t film the event.”

Ackerman is survived by his wife, Jill Slosburg-Ackerman, and their son, Jesse, and his children from his first marriage to Mildred Rosenbaum Ackerman (who predeceased him), Anne, Tony, and Sarah; three grandchildren and two great-grandchildren. In lieu of flowers, donations can be made to the Friends of the Community Learning Center in Cambridge. A memorial service will be held at Harvard in the spring.