Humanities and science come together at conference 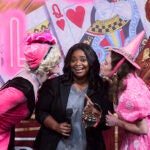 The sixth annual National Collegiate Research Conference (NCRC), considered the largest student-run undergraduate research symposium in the nation, brought an estimated 200 undergraduates from across the U.S. and abroad to Harvard’s campus on Jan. 19-21.

Both community and interdisciplinarity were key themes that emerged from the conference, which included panels on graduate school, workshops on diversity and inclusion in research, dialogues on publication practices and ethics, keynote lectures, career fairs, social outings, and a culminating poster competition.

According to the co-president of the Harvard College Undergraduate Research Association (HCURA), Christopher Li ’18, what makes the conference unique is that it’s completely envisioned, planned, and staffed by Harvard undergraduates who are part of the HCURA. Founded 10 years ago, HCURA’s core mission is to advance undergraduate access to and involvement in research through close collaborations with faculty, departments, and administrators, making it the driving force behind many on-campus initiatives aimed at promoting undergraduate research.

For NCRC the group brought together the sciences and humanities. Among the speakers was Harold Varmus, former director of the National Institutes of Health and recipient of the 1989 Nobel Prize in Physiology or Medicine for work on cancer genetics, who addressed the crucial role of scientists in Washington and the importance of communicating science to policymakers and the public.

“I really appreciated how all the speakers came from such a diverse range of backgrounds,” said Molly Zeme, a freshman with interests in both the sciences and the humanities and a member of HCURA. “But each highlighted the importance of pursuing truth and knowledge through their inspiring personal stories.”

Professor Homi Bhabha, the Anne F. Rothenberg Professor of the Humanities, reflected on curricular questions in the global humanities and encouraged participants to become “internal immigrants,” and look at themselves and their academic disciplines from the outside.

HCURA member Ugo Aguwa, a sophomore who studies the history of science, added, “Undergraduate research can often seem isolating, as students spend long hours alone pursuing specialized academic endeavors in the lab or library. But NCRC really proves the opposite.” In fact, throughout the semester she directs HCURA’s on-campus initiatives targeting freshmen looking to start research for the first time.

“With NCRC, we strive to promote a national platform for undergraduate researchers across all disciplines to share their work,” said Li, who is studying developmental biology and conducting stem cell research. “Our goal is to enrich the undergraduate research experience across institutions by bringing students together, in the hope that collective sharing, discussion, and engagement will further advance and compel students in their scholastic pursuits and contribute to the creation of an international and interdisciplinary undergraduate research community.”

In addition to Varmus and Bhabha, the 2017 National Collegiate Research Conference included the following keynote speakers:

During the year, the HCURA continues to promote the kinds of interdisciplinary conversations that happen at the conference. The organization arranges smaller research symposia, speaker series, and an official publication, Brevia, which publishes short-form research from all disciplines.