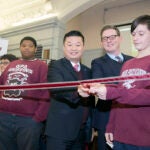 Getting their hands on science

More than four years after Harvard and MIT launched the nonprofit learning platform edX, a joint research team from the two schools have released a report on the online classrooms.

What they found was increased participation by diverse participants, many of whom are teachers.

“HarvardX and MITx: Four Years of Open Online Courses,” released today, examined massive open online courses (MOOCs) the schools launched between fall 2012 and summer 2016. The report — one of the largest surveys of MOOCs to date —builds on benchmark reports from 2014 and 2015 that described the first two years of open online courses. It is the latest product of a cross-institutional research effort led by study co-authors Andrew Ho of Harvard and Isaac Chuang of MIT.

“We explored 290 Harvard and MIT online courses, a quarter-million certifications, 4.5 million participants, and 28 million participant-hours,” said Ho, chair of the Vice Provost for Advances in Learning (VPAL) Research Committee and professor of education at Harvard.

“Strong collaboration has enabled MIT and Harvard to jointly examine nearly 30 million hours of online learner behavior and the growth of the MOOC space,” said Chuang, senior associate dean of digital learning and professor of electrical engineering and computer science, and professor of physics.

“This reporting series continues to provide the benchmark for understanding the MOOC ecosystem created by Harvard and MIT,” said Dustin Tingley, faculty director of the Vice Provost for Advances in Learning Research Team and professor of government at Harvard.

The report’s key findings include:

Cumulative MOOC participation has grown steadily over four years. Over the period studied, 2.4 million unique users participated in one or more MITx or HarvardX MOOCs, with an average 1,554 new, unique participants enrolling per day. A typical MOOC certificate earner spent 29 hours interacting with online courseware, and 245,000 learner certificates were issued for successful completion.

Participants in MOOC “classrooms” are heterogeneous in background and intention. A typical course certifies 500 learners and has 7,900 learners accessing some course content after registering, and around 1,500 choosing to explore half or more of a course’s content. Demographic statistics of note include a median learner age of 29 years old, a 2:1 male-to-female ratio (67 percent male, 33 percent female), and significant participation from learners in other countries (71 percent international, 29 percent from the United States).

Teachers are active MOOC participants. Surveys of learners in HarvardX or MITx courses also helped capture the broadest sense of teacher and instructor identity among MOOC participants. The study found strong levels of participation from this cohort, with 32 percent of respondents self-identifying as “being” or “having been” a teacher. Of this group, 19 percent said they instructed on the same topic as the online course in which they participated, and 16 percent achieved course certification.

Data appendices and other analyses from the report are available online