Getting their hands on science 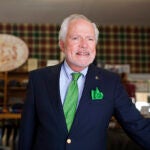 The excitement was palpable at Gardner Pilot Academy (GPA), as students, teachers, parents and special guests gathered last month in the auditorium of the community elementary school in Allston for a momentous event. It was a day, in fact, that principal Erica Herman had waited nearly a decade to see.

On this special morning, Herman, along with several young GPA scholars, Boston Public Schools Superintendent Tommy Chang, and Harvard officials cut the ribbon on the school’s new state-of-the-art science laboratory — a vision brought to life with a $500,000 donation from Harvard University.

“Over the last 10 years we have been working on how to transform unused basement space to create a school that is ready for the 21st century,” said Herman. “We wondered how we would get the money, and thanks to the tremendous commitment from Harvard University in seed funding, we were able to not just do one small project but hugely transform the basement.”

The academy is an inclusion school in the Boston school system that serves nearly 370 students from pre-kindergarten through eighth grade. During the summer, the basement of the 100-year-old building on Athol Street was gutted for the construction of the new lab. The renovation gives middle school students an opportunity to learn science in an environment that allows hands-on participation.

The Harvard grant enabled construction of the lab space — including epoxy-resin counters and work surfaces that are resistant to water, heat and chemicals, which lets students and teachers to use certain materials for lab work and demonstrations. The funds also paid for whiteboards, tables, chairs, four in-room sinks (including one with handicap access), storage, and a recycled composite flooring for easy clean-up.

The donation, announced in 2015 from Harvard Community Benefits, is part of a cooperation agreement with the City of Boston. The agreement supports professional development for teachers, gives students direct access to Harvard programs, and helps with after-school programs at the academy.

“It was an honor and a privilege to visit with students and staff at GPA, and to help dedicate the school’s new science lab,” said Paul Andrew, vice president of public affairs and communications at Harvard. “Harvard has a valued, longtime partnership with the GPA, and it was terrific to see how the transformation of this space has sparked such enthusiasm among students and teachers, enhancing the strong culture of learning that permeates the GPA.”

The renovations focused on the students’ educational needs, Herman said. The team met with parents and community representatives to ensure the enhancements met the highest standards, she said. The result — paid for with funding from Harvard, Boston Public Schools, grants, school-based fundraising and private donations — was an up-to-date science lab ready for use on the first day of school in September.

“It’s been a great collaboration that we will continue to nurture, learn from and grow with,” said Chang. “Thank you to all the teachers who make the magic happen here and to Harvard who has helped make this place tick. Every single time I’m here I’m just amazed by the work these young people are producing. You are helping ensure they are prepared for college and for life.”

Nearly 100 students utilize the science lab daily, including several who attend after-school programs. Daunty Geovanny Martinez, 13, an eighth-grader from Boston, said he hopes to become a pharmacist one day and thinks the science lab will help him do well in college.

“I use the science lab every day and I love it,” said Martinez. “Before we always had restrictions on what we could do with science, now everything is so much better. I feel like I’m learning more.”

Marcus Penny, a middle school science teacher at GPA, said what makes the science lab so special are the amenities that help students access the curriculum at a deeper level.

“It’s amazing what can actually be done to turn unutilized space in a school into an extremely fruitful center of learning,” he said. “We also have deep gratitude for the partnerships that can help us move forward to help students on the ground-level. We have functional results students can use right now.”

More than 70 percent of students at Gardner Pilot Academy are from Allston-Brighton. The school offers a wide range of services including before- and after-school programs, health and counseling services, an on-site health clinic, tutoring and mentoring to students and their families, and adult-education programs. To address the growing needs of the community, over the past four years the academy expanded from a K-5 program to one that offers pre-kindergarten through eighth grade.

Lauren Lafferty, director of extended services at GPA, said the additional students and the expansion of programs created the need for critical improvements to the century-old facility.

“We have an incredible faculty dedicated to supporting the whole child but we have been in a gap,” she said. “We need both faculty and students to have access to high-quality, 21st-century resources and materials, as we know this is connected to success in college, career, and beyond.”

Alexandra Montes McNeil, E.D., the instructional superintendent supporting the GPA and 14 other schools in the Boston school system, has a special connection to GPA. Her mother, Catalina Montes, was the principal there for more than 20 years, and her brother attended the school.

“I’m very excited about this. My mother’s vision while she was principal was that this was a community school, so she laid that foundation and Erica has worked so hard to help further that vision. It’s amazing,” said McNeil, a former science teacher. “My mother cried when she saw the science lab, Erica took it beyond her wildest imagination.”

The ceremony took place in conjunction with Give the Gift of Reading, which brings together community members and GPA students to honor and celebrate the value of reading and education. Guest readers including members of Boston Public Schools administration, Harvard staff, and Senator William N. Brownsberger visited classrooms to read aloud to students before the ribbon-cutting. This was the sixth Give the Gift of Reading event in over nine years.

“The kids love The Gift of Reading and it’s a great way to pull together our greater Gardner Pilot community and show people what we are all about, especially with the amazing renovation of the science lab,” said Ashley Baima, first grade learning specialist at GPA.

Herman said Gardner Pilot Academy intends to keep the expansion going. The science lab was phase one of their capital improvement project, and Herman is already working on phase two — adding a full-service kitchen and renovating cafeteria space to expand the school’s meal program.

“None of this would be possible without the tremendous commitment from Harvard University who really gave us the foundation funding to make all the visions seem possible,” she said. “It’s a true partnership.”