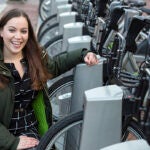 A combination of two FDA-approved drugs — a topical chemotherapy and an immune system-activating compound — was able to rapidly clear actinic keratosis lesions from patients participating in a clinical trial. Standard treatment for this common skin condition, which can lead to the development of squamous cell carcinoma, takes up to a month and can elicit several unpleasant side effects. The report from Harvard-affiliated Massachusetts General Hospital (MGH) investigators has been published online and will appear in the January issue of the Journal of Clinical Investigation. 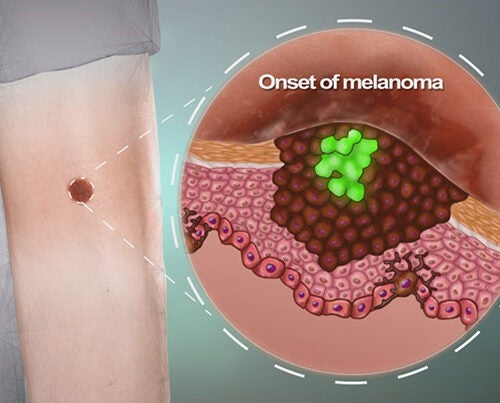 First demonstration of a melanoma arising from a single cell

Calcipotriol, an FDA-approved treatment for psoriasis, induces expression in the skin of an immune-system activator called TSLP. While overexpression of TSLP is associated with the allergic inflammation seen in asthma and eczema, it has been noted that individuals with these allergic conditions appear to be less susceptible to skin cancer. Other studies have supported TSLP’s ability to suppress skin cancer development, which led Demehri’s team to investigate its potential against actinic keratosis.

Experiments with a mouse model of skin cancer development showed that twice-weekly applications of calcipotriol both induced TSLP expression and delayed tumor development. When tumors did develop, they were fewer and smaller than in mice not treated with calcipotriol. An experiment in which calcipotriol was applied to the ears of mice while skin cancer was induced to develop on their backs resulted in elevated blood levels of TSLP and the suppression of tumor development, implying that brief TSLP-inducing treatment could lead to a lasting systemic antitumor immune response.

Since clinically available concentrations of calcipotriol have had limited effectiveness against actinic keratosis and produced no evidence of immune activation, the MGH team hypothesized that combining the available 0.005 percent calcipotriol ointment with 5 percent fluorouracil (5-FU) cream, a standard treatment for actinic keratosis, might amplify the immune-activating potential of calcipotriol. In a randomized, double-blinded clinical trial, 65 participants with multiple actinic keratosis lesions were treated with a combination of calcipotriol and 5-FU, while 67 received a control preparation of 5-FU mixed with petroleum jelly.

The preparations were applied twice a day to the entire affected sites of participants — face, scalp, and arms — and because treatment with 5-FU alone requires seven or more days to have any effect against actinic keratosis, participants were treated for four days only. A day after treatment ended, the treated skin of those receiving calcipotriol plus 5-FU, including areas that did not contain clinically visible lesions, showed clear signs of inflammation, indicating immune system activation. Areas of inflammation were found to have a significant influx of lymphocytes — primarily T cells — at the sites of lesions.

“As both medications used in our trial are already available clinically, they could readily be used by dermatologists to treat actinic keratosis, particularly in patients for whom conventional treatments have failed,” says Demehri, who is an assistant professor of dermatology at Harvard Medical School. “The ultimate goal of our research is to use patients’ own immune systems to prevent cancer, so we are very excited to determine whether our success in activating a T-cell-dominant immune response against a skin cancer precursor will protect the treated skin against future skin cancer development. We’re planning to follow the participants in this trial over the coming years to address that important question.”

Trevor Cunningham of the MGH Center for Cancer Immunology and CBRC is lead author of the Journal of Clinical Investigation report.

The study was supported by National Institutes of Health grants and grants from the American Skin Association, the Dermatology Foundation, the Burroughs Wellcome Fund, the American Philosophical Society, and the La Roche-Posay Research Foundation. MGH has filed a patent application covering the work described in this paper.