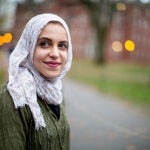 Putting their faith into action

In classroom and on streets, students learn how the city has evolved on issues ranging from justice to geography

The iconic photograph, which came to symbolize the racial strife that gripped Boston during the school-busing crisis of the 1970s, speaks for itself. Against the backdrop of City Hall Plaza, a white teenager carrying a flagpole bearing the American flag looks like he is about to spear an African-American man. Dubbed “The Soiling of Old Glory,” the image won Boston Herald American photographer Stanley Forman a Pulitzer Prize in 1977.

The victim, Theodore Landsmark, suffered a broken nose in the assault, and was suddenly cast as a spokesman on issues of social justice, a role he hadn’t envisioned for himself. When the picture was taken, Landsmark, a Yale-educated attorney, was on his way to City Hall. He hadn’t been paying attention to the protests against court-ordered busing aimed at ending segregation in Boston schools.

In October, Landsmark discussed the incident with students enrolled in “Reinventing (and Reimagining) Boston: The Changing American City.” But rather than lingering on what he called “ancient history,” he pressed his audience to play a part in addressing income inequality in Boston. A recent study ranked the city first in the United States in income inequality.

“It’s much more important to talk about this time and what’s going on now,” Landsmark told the students. “Is it OK to be part of an elite that doesn’t address the needs of those who are less privileged? Is there something we ought to be doing? My question to you is: What do we need to do to begin to address the inequalities that, in some respect, help us to be in this room?”

That kind of interaction is what students have come to expect from the class, which is taught by Robert Sampson, the Henry Ford II Professor of the Social Sciences and co-director of the Boston Area Research Initiative, and David Luberoff, a lecturer on sociology and senior associate director of the Joint Center for Housing Studies of Harvard.

“He was more interested in hearing what we had to say,” she said. “Speakers are not what you expect. They want our input. They’re always asking what we can do.”

Landsmark talked to students after a screening of excerpts from “Eyes on the Prize,” a PBS documentary on the Civil Rights Movement that first aired between 1987 and 1990. The scenes were powerful. In one, white residents took to the streets to march against the court mandate to end school segregation. In another, white students threw rocks at buses filled with black students while jeering at them. In a third, a white mob pulled a black motorist from his car and beat him up until police came to his rescue.

Sampson and Luberoff’s course uses Boston as a case study of urban change, examining economic inequality, political governance, crime, and race, but its lessons are just as relevant to other cities in the United States, and around the world, that have become models of urban renaissance.

“A lot of people don’t realize that Boston in the 1970s really looked like Cleveland, or even Detroit and St. Louis,” he said in an interview at his office in Williams James Hall. “There was de-industrialization and a huge population drop. It was a mess. And yet today it’s pretty much a reinvented city.”

To illustrate how that reinvention unfolded in Boston, the teachers invite a range of urban leaders to the classroom — from planning directors to housing administrators to community workers. Their presentations give students a basic understanding of how things work on the ground, Sampson said.

The course includes a bit of Boston history, beginning with the 19th century, when the Brahmins were in charge. But it focuses on the 20th century, a time of de-industrialization, poverty, segregation, and racial tension, and the 21st, an era in which urban renewal co-exists with some gun violence, racial tension over gentrification, and the opioid crisis.

As part of the General Education curriculum, the course also encourages students to connect what they learn in class with real life. Requirements include visits to three neighborhoods and conversations with city leaders and community members.

When she visited Charlestown, Reynolds was struck by her findings. Walking the narrow streets, she noticed how the neighborhood, with both upscale mansions and public housing, mirrors the socio-economic divide the statistics show.

“The neighborhoods are so different and they’re so close to each other,” she said. “They’re reflective of the income differences.”

Speakers such as Landsmark, now a board member of the Boston Planning and Development Agency, have bolstered the case.

“After I was attacked at City Hall Plaza, I was facing television cameras and reporters asking me how I felt about busing, which I hadn’t been involved with, and how I felt about racial differences in America, which I hadn’t thought about,” he told the students. “Suddenly I was a spokesperson for a cause I had not been involved with, and that will happen to you, too. At some point in your life, every one of you will be called upon to do something fundamentally important. You have to be prepared.”