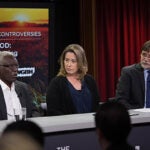 In his new book, Michael Lewis profiles the pioneers behind behavioral economics

Trusting one’s intuition to make good decisions is still a popular practice, but it shouldn’t be.

Behavioral scientists have long known that the human mind is hard-wired for error and that our misplaced faith in “gut” judgments is further proof of innate human fallibility.

After writing several best-selling books that examined unsung mavericks who changed the way people think about and operate in baseball and on Wall Street by using data to help sidestep such cognitive blind spots, author Michael Lewis set his sights on the two men who first identified the flaws embedded in our thinking.

In his new book, “The Undoing Project,” Lewis explores the colorful lives of Daniel Kahneman and the late Amos Tversky, who were sometimes called the “Lennon and McCartney of psychology.” During the 1970s and ’80s, the brilliant Israeli-American psychologists had pioneering insights into human judgment and decision-making that gave birth to the field of behavioral economics.

Their findings also transformed psychology and had deep impact across the social sciences, as well as on medicine, law, business, and anywhere that algorithms are relied upon as a substitute or hedge on the inherently flawed human mind.

Although the pair created an important, well-known body of work that still resonates, Lewis said that the story he wanted to tell wasn’t about their breakthrough discoveries, but about their close, offbeat partnership and the effects that collaboration had on the world.

“What it was, was two guys who loved each other sitting in a room thinking about some unbelievable, interesting [stuff],” said Lewis, during a talk at Harvard Business School (HBS) Tuesday evening with Michael I. Norton, the Harold M. Brierley Professor of Business Administration at HBS.

The introverted, self-doubting Kahneman, now retired from Princeton University, was a child fugitive hiding out in barns during Nazi-occupied France who went on to win the 2002 Nobel Prize in economic sciences. Tversky, meanwhile, was a military hero and an outgoing, fun-loving iconoclast who struck nearly everyone he knew as the smartest person they had ever met, Lewis said. He heard the claim so often during his research that it became the metric for the world’s shortest intelligence test. “The longer it takes you to figure out that Amos is smarter than you, the stupider you are,” Lewis joked.

Though stars in their own right, together the pair exploded the era’s prevailing theories and assumptions about human decision-making and put forward the idea that people are largely irrational, programmed to make certain mistakes in judgment that stem from their innate cognitive biases.

Eventually, Lewis said, they arrived at two central truths: First, “We want the world to be a more certain place than it actually is, and we’re continually trying in our minds to make it seem more certain, more predictable than it actually is” by using cognitive “tricks” to explain the unexpected. Second, “We need to preserve doubt about yourself and your thoughts and to resist certainty not only in yourself, but in the people who would advise you.”

Lewis said the early spark for the book, whose title came from the pair’s effort to “undo the false view of human nature” as well as the unfinished work left after they ended their collaboration, came from Harvard Law School’s Cass Sunstein ’75, J.D. ’78, and Richard Thaler, a behavioral economist at the University of Chicago.

In their New Yorker review of Lewis’ 2003 blockbuster “Moneyball,” about the then-emerging use of data analytics to exploit “market inefficiencies” in the way baseball scouts evaluated talent, Sunstein and Thaler pointed Lewis in the direction of Kahneman and Tversky’s research, noting that it was the intellectual foundation for such analysis.

“I tucked that away, not quite sure what I was going to do,” Lewis said.

Eventually, Lewis met Kahneman in 2007 while he was writing the mega-hit “Thinking, Fast and Slow.” They began a series of deep conversations over the next five years, with Lewis prodding and probing the reluctant, ever-dubious scholar to open up about his life and partnership, a topic Kahneman never felt merited a book. But the gimlet-eyed Lewis knew he had a remarkable story on his hands and refused to let go.

“This was one for the ages, I thought, and if I didn’t do it, someone was going to come along and do it probably after he was dead. And the likelihood of that being a good book was very, very low,” Lewis joked about how he finally convinced Kahneman: “If anyone should have the right to write a bad book, I should.”

Harvard’s Behavioral Insights Group, with whose members Lewis spent some time while preparing to write the book, sponsored the talk. The group is a consortium of scholars studying decision research, as well as behavioral scientists and economists, that was launched in 2013 by Max Bazerman, Jesse Isidor Straus Professor of Business Administration at HBS and co-director of the Center for Public Leadership at Harvard Kennedy School (HKS), and by Iris Bohnet, a professor of public policy and director of the Women and Public Policy Program at HKS.