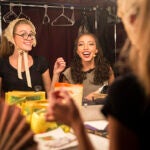 Local shops help give the Ivy League a certain flair

In the 1970s, 13 men’s clothing stores in Harvard Square catered to the Ivy League look. Today only two remain: J. Press, which opened in Cambridge in 1932, and the Andover Shop, which followed 21 years later.

The look they sell is one that has stood the test of time.

“The Ivy League look is part of our heritage,” said Denis Black, the 69-year-old general manager emeritus of J. Press. The first store was founded in 1902 in New Haven, Conn., by Jacobi Press, a Latvia-born haberdasher. After satisfying the sartorial needs of the Yale community and many of New England’s finest preparatory schools, he went on to open stores in New York City, Cambridge, and Princeton, N.J. Today, the company maintains locations in New Haven, Washington, D.C., New York, and at the corner of Mount Auburn and Dunster in Harvard Square.

The Ivy League style’s heyday stretched from the 1950s into the late 1960s, when elite New England colleges became less gentrified. Seated in a leather chair on the sales floor, surrounded by photographs celebrating Ivy League culture, Black ticked off the components of the classic look: a natural shoulder, three-button jacket with a moderate lapel; plain-front trousers; button-down collared shirt; and tie.

“Surprisingly, the term ‘Ivy League look’ was not coined by the Ivy League or any men’s clothing shop,” said Richard J. Press, former president of the company and grandson of the founder. In fact, it was coined by a 1954 Life magazine article titled “The Ivy League Look Heads across the U.S.” Press said the piece, which gave credit to both J. Press and Brooks Brothers for having “perpetuated” the Ivy style, created a stir in the world of men’s fashion. Department stores from San Francisco to Des Moines to Wichita began to advertise their version of the clothing.

Not all Ivies had equal fidelity to the look, remembers Press, who graduated from Dartmouth in 1959. Harvard, Yale, and Princeton enforced stricter dress codes than the others, he said.

Alexander Moore ’58 agrees. He recalls that Harvard men could not enter any College dining hall in the 1950s without having a coat and tie on. “If you wanted breakfast from Harvard,” Moore said, “you always donned a coat and tie and you usually kept wearing it for morning classes, and likewise after lunch for afternoon classes.”

Moore said that J. Press had the most exclusive reputation of the clothing shops in Harvard Square during his era. “Harvard students could generally recognize a J. Press suit on a man as opposed to a Coop or Brooks Brothers suit,” Moore said. “I don’t know how we knew, but we did.”

With the Ivy League look came a sense of empowerment, he added. “The style — as well as the obvious excellence of the materials and the cut — provided a very steadying and centering sense of personal security.”

According to Christian Chensvold, founder and editor in chief of Ivy-Style.com, Moore’s sentiment remains in vogue. The popularity of Ivy-Style.com and the continued publication of books on Ivy League fashion testify to an enduring interest in the style, he said.

Daniel Maxton, a 25-year-old sales associate, said that most of J. Press’ clients are return customers and want a style of dress that they are comfortable and familiar with.

“We are not keeping up with all the latest fashions,” Maxton said. “There is a timelessness to the type of men’s clothing we offer.”

That carries over to the store itself. The sales floor hasn’t changed much since the mid-1940s, still making good use, for example, of the elegant 70-year-old wooden fixtures and clothing racks. “We have had Harvard graduates from the 1940s drop in and tell us that the shop still looks like it did when they were at Harvard,” Maxton said.

Harvard lecturer Stephen Shoemaker, whose courses include “Harvard’s History and Evolving Religious Identity,” has been a J. Press customer since the 1990s. His students often ask him why he always has to dress up for class. To which Shoemaker, in his three-piece suit, is often tempted to respond: “Well, why do you always have to dress so down for class?”

Anthony Chiorazzi has an M.Phil. in social anthropology from Oxford University and a master’s degree in theological studies, with a focus on religion and the social sciences, from Harvard Divinity School.