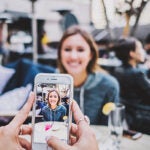 Researchers have long understood that functional magnetic resonance imaging (fMRI) is a powerful tool for understanding both brain structure and activity, but new research suggests it is a good deal more potent than they thought.

Using ultra-fast MRI scans, a research team led by Laura Lewis, a junior fellow in the Harvard Society of Fellows, was able to track rapid oscillations in brain activity that before would have gone undetected, a development that could open the door to understanding fast-occurring cognitive processes that once appeared off-limits to scientists. The study is described in a paper published in the Proceedings of the National Academy of Sciences, in collaboration with Jonathan Polimeni, an assistant professor at Harvard Medical School and Massachusetts General Hospital (MGH).

“The thought most people had was there is no point in looking for faster brain activity with fMRI,” Lewis said. “Because fMRI measures brain activity very indirectly, by tracking blood oxygenation … which is thought to lag by as much as five seconds. If that’s the case, you can’t measure brain activity that happens quickly because by the time the blood flow responds the signal is blurred out.

“We were able to measure oscillations in brain activity at almost once per second, which is much faster than was thought possible,” she said. “And those oscillations were actually 10 times larger than anyone had predicted.”

For Lewis and colleagues, the notion of pushing fMRI technology further happened more by accident than design. As part of her Ph.D. work, Lewis focused on the oscillations in brain activity that occur as people lose consciousness, either from being anesthetized or as they fall asleep.

“People might think that when you’re under anesthesia your brain just turns off,” she said. “It may feel that way, but if your brain is off, you’re dead. What actually happens is your brain gets locked into a rhythm of oscillation.”

Even during the day, Lewis said, oscillations play an important role in ensuring various brain regions organize themselves and work in synch.

“Unfortunately, our understanding of those oscillations is still fairly limited … because fMRI systems typically scan once every few seconds,” Lewis said. “But a few years ago, researchers at the Athinoula A. Martinos Center for Biomedical Imaging at Harvard Medical School and MGH invented a method to scan the brain once every 200 milliseconds. That’s a major improvement.”

Initially, however, that advance in scanning speed was seen merely as a way for researchers to get their data faster.

“People thought, ‘Great, our 20-minute scan is now a 5-minute scan,’ or ‘Now we can get many more data points, so our results will be better,’” Lewis said. “But there wasn’t a feeling that scanning faster would allow us to get more information about fast brain activity, because fMRI measures slow changes in blood oxygenation rather than directly recording brain activity.”

To test whether that was true, Lewis and colleagues devised a simple experiment. They placed volunteers in scanners, then rapidly flashed images on a screen. To their surprise, Lewis and colleagues found they were easily able to track the signals of brain activity, even when images were flashed once every two seconds.

“Suppose there is an oscillation that occurs every 1.3 seconds,” she said. “Because we’re scanning every 200 milliseconds, we can measure that wave at a number of points, and we can see the oscillation evolve over time. But if you only scan once every three seconds, you don’t see anything.”

The results offer tantalizing clues to how the brain regulates blood flow to cope with rapid changes in mental activity.

“We don’t know the exact mechanism driving this … But it’s useful to have this technology, because many of the things we want to scan with fMRI are the complicated things people do, like using language or high-level cognition, and those happen in hundreds of millisecond timescales,” she added. “Now we’ve realized that fMRI, once you’re scanning fast enough, can actually start to resolve those processes.”

Though Lewis ultimately hopes to return to the questions that she began with — what happens to brain activity during sleep and under anesthesia — she plans additional research aimed at exploring how fast fMRI scans can be performed.

“We can now go back to studying sleep … and see where these oscillations are coming from,” she said. “But we’re also starting a separate line of work to see how far we can go with fMRI. We want to see what the temporal limit is. During our scans, it was keeping up, so I think it’s an open question how fast the vasculature can respond.”