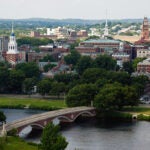 Delving into ‘belonging’ at Harvard

Harvard’s Cumrun Vafa, the Donner Professor of Science, and Andrew Strominger, the Gwill E. York Professor of Physics, have been named winners of the 2017 Breakthrough Prize in Fundamental Physics in recognition of their groundbreaking work in a number of areas, including black hole theory, quantum gravity, and string theory.

“It is a great pleasure to have my work recognized by such an esteemed group of colleagues,” Vafa said of the prize. “I have had the good fortune to be at Harvard for over 30 years now, and I have had the privilege of discussing physics and mathematics with my first-rate colleagues as well as talented students here. They, as well as the welcoming atmosphere at Harvard, have played a key role in my research.”

Strominger also pointed to the community of researchers he has collaborated with over his career, and expressed hope that others will continue to seek out answers to the fundamental questions of the universe.

“There is a prevalent myth in science — perhaps especially in theoretical physics — that the real progress is made by lone geniuses in patent offices or under apple trees, while the rest of the community merely fills in the details,” he said. “The truth is in fact just the opposite. We all help and communicate with one another on many conscious and unconscious levels, and the real progress is made by the community of seekers as a whole.

“The physical truths about our universe are there waiting to be discovered,” he continued. “Those few who are recognized with prizes were merely the first to arrive — days, weeks, or at most a few years ahead of the others already well on their way. The selected prize winners have no irreplaceable role in the greater communal quest.”

Vafa also credited at least part of his work to the many influential Persian scientists and mathematicians who came before him.

“I was born in Iran, the home of many eminent scientists and mathematicians,” he said in accepting the award. “In my pursuit of science, I was inspired by their legacy. I view science as a timeless, borderless adventure where everyone can participate, and it can bring out the best in humanity.  This recognition is a pleasant contrast to times like ours where the value of science is sometimes challenged and the possibility of collaborations among people coming from different countries is put to question. I am fortunate to have worked alongside over 150 first-rate physicists and mathematicians from all over the world, and I view this award as a recognition of their work as much as mine. The support of my family, and in particular my wonderful wife Afarin has played a crucial role for me.  Also my three sons, Farzan ’15, Keyon ’16, and Neekon ’19 have given me much inspiration and joy throughout the years.”

Both Vafa and Strominger have made critical contributions to the search for truths, particularly in the area of string theory.

Working together, Vafa and Strominger in 1995 made the first controlled calculation of black hole entropy — first theorized by Stephen Hawking and Jacob Bekenstein — using string theory, and demonstrating the connections between geometry and field theories that arise from string theory.

Vafa and Strominger shared the $3 million award with Joseph Polchinski from the University of California.

In addition, Harvard Physics Professor Xi Yin was among the recipients of the New Horizons in Physics Prize, which recognizes the work of early career physicists and mathematicians.

Stephen J. Elledge, the Gregor Mendel Professor of Genetics and Medicine at Harvard Medical School and a Howard Hughes Medical Institute investigator, was also among the recipients of this year’s prize in the life sciences.