Putting their faith into action 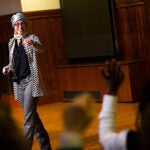 Comparative religion scholars tell what drew them to their field

Halah Ahmad ’17 was born into an acute awareness of religious difference.

“My dad is a Palestinian immigrant and Muslim, and my mom is Polish-American and was raised Catholic before converting to Islam,” explains Ahmad, who grew up in Milwaukee. “So I was familiar with interacting with different faiths, and saw how we were similar.”

Julian Nunally ’17, in contrast, grew up as a Christian in the Bible Belt city of Chattanooga, Tenn. He, too, found political and social relevance in the study of comparative religion.

“Religion as a tool for social change is pivotal to my studies of Christianity,” said Nunally. “Throughout history, religion has been the cornerstone of social progress. If you want people to act, it has to flow from their core values and the deeply held truths they have about life.”

The two seniors are hoping to use their studies and faiths for positive change. Ahmad’s senior thesis explores active faith, focusing on the moral inclination to give and the empathy she saw in volunteers when she worked at refugee camps in Greece this past summer. Nunally’s thesis will focus on the church’s role in addressing mass incarceration.

Growing up, Ahmad took every chance to speak up about issues of belief, and she quickly saw the effects such engagement could have. “Especially in terms of civil rights, urban renewal projects, and inequality in Milwaukee, religious groups had taken the lead to advocate for people’s rights and for alleviation of poverty,” Ahmad said.

In high school, on the 10th anniversary of 9/11, she spoke at several interfaith events, reflecting on the lessons that could be learned from the aftermath and the dehumanization of a faith group that followed the tragedy. And a few weeks after the August 2012 shooting at a nearby Sikh temple, Ahmad was invited to speak at the Sikh service, alongside Jewish, Christian, Muslim, and Native American community leaders, in a collective response to the violence.

Ahmad was struck by the way “faith groups were ready to be inspired and to work with people based on what they believed in, which was very different from economic or other strategic approaches I had seen.” She spent a gap year working with an artists’ collective in the Middle East, then came to Harvard uncertain of a field of study. She explored government, Near Eastern languages and civilizations, and sociology, but “I knew I wanted to be in a department that looked at religion not just as historical phenomenon and the particularities of theology, but at what its impact on people is, how people use it daily.” 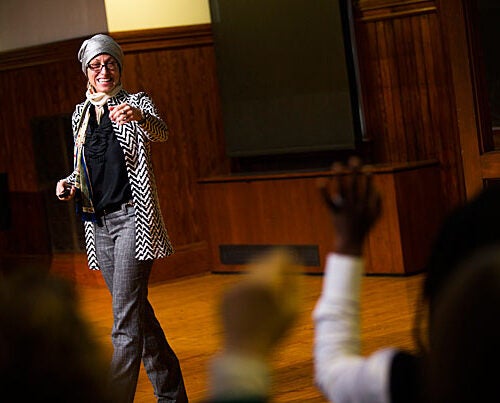 In the study of Islam, with a thematic focus on religion and society and a secondary concentration in sociology, Ahmad found what she was looking for — a dedication to joining the ranks of what she calls “compassionate intellectuals.”

For her, the study of religion tied theory to humanity: “The sociology of religion was where I felt comfortable in my studies because it was a place where I could unite peoples’ personal convictions and the study of how people work in groups with how people solve social problems, both in their own lives and for each other.”

Nunally’s path to his field of study was more direct. He found himself called to be in ministry after performing spoken-word poetry about his Christian identity in his high school talent show, and as a College freshman he decided to focus on Christianity and the philosophy of religion to gain the skills that would enable him to give back to his home community.

After graduation, he plans to open a nonprofit with a Christian focus on love that will employ at-risk youth and ex-convicts and help them regain control of their lives. Nunally draws particular inspiration for these goals from the theology of Martin Luther King Jr., and his legacy of mobilizing religious communities to act.

Nunally said his experiences as an African-American man in the South have significantly shaped his career trajectory.

“We’re attacking a whole new monster now,” he said. “If I had lived a few neighborhoods over, it could easily have been me that graduated from high school at a sixth-grade reading level, messed up, and entered the prison system at a young age,”

Nunally said the role of religion in the Civil Rights Movement set a precedent for his current pursuit of justice. “It’s time to use religion not to say ‘There’s no difference between black and white,’ but to say ‘There is no place for oppression in this world.’”

Ahmad is similarly adamant about the need to recognize religion in activism. “No one can deny the role of religion, especially in this country, in motivating social change and advocacy for Civil Rights. It’s Martin Luther King Jr., it’s Malcolm X, it’s Jane Addams, it’s all of these people who have been motivated by religion to serve the needs of others.”

Ahmad worked for Professor Diana Eck’s Pluralism Project after freshmen year, but it was her research for Albania’s Ministry for Urban Development on displaced Roma and Egyptian populations, and the cultural and religious environments they occupied, that solidified her interest in social policy. She sees entering local government in Milwaukee as a good starting point, but wants to keep her trajectory tied to scholarship, with room for flexibility.

“Maybe politics, maybe education, maybe getting my Ph.D. and writing a lot,” she said.

Whatever the future holds, Ahmad and Nunally both cherish their religious studies at Harvard, as well as the faith groups and other clubs they found on campus. Ahmad is president of the Harvard Islamic Society (HIS) and the Palestinian Solidarity Committee, broadcasts for the Harvard radio station WHRB, and is involved in the Cabot House art studio, Third Space. As captain of the track and field team, Nunally has less time to spare, but is still able to work as business manager of the Ichthus, Harvard’s magazine of Christian thought, and serve on the board of Harvard College Faith and Action, a non-denominational Christian student group.

Both see life lessons in their extracurricular involvement.

With HIS, Ahmad organizes social and educational programming for the Muslim community across the University. “If religion is where people draw values like compassion and the dignity of human life from, then it plays a crucial role in activism,” she said, explaining how this dimension of activism is often dismissed. “If you ignore that, you’re ignoring a huge capacity for people to be more active citizens, to be more aware of themselves and others.”

Amanda Beattie is a Harvard College senior with a concentration in the comparative study of religion, focusing on religion and society, with a secondary in ethnicity, migration, and rights.