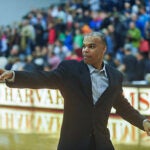 Club Oberon, known for its over-the-top disco performances, wide-open comedy specials, and colorful drag shows, took a break from the edgy this month to host the Harvard-Radcliffe Drama Club’s production of “Into the Woods.”

At a glance, the show is simply a fun mash-up of fairy tales. But in true Oberon fashion, audiences found themselves witnessing a wild, behind-the-scenes look at their favorite storybook characters. From the Baker attacking the Wolf with a machete to Cinderella’s stepmother hacking at her daughters, the show danced the line between the traditional tales and off-color humor.