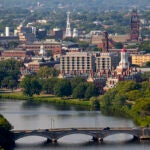 “Early admission appears to be the ‘new normal’ now, as more students are applying early to Harvard and peer institutions than ever before,” said William R. Fitzsimmons, dean of admissions and financial aid. “At the same time, we have continued to stress to applicants, their families, and their guidance counselors that there is no advantage in applying early to Harvard. The reason students are admitted — early or during the regular action process — is that their academic, extracurricular, and personal strengths are extraordinary.”

The demographics for the Class of 2021 early action group are similar to last year’s group. Slightly more women (48.0 vs. 47.4 percent) make up the new class thus far, and more African-American students were admitted (12.6 percent vs. 9.5 percent last year). In addition, 21.7 percent of admitted students identify as Asian-American (compared with 24.1 percent last year), 8.8 percent as Latinos (vs. 9.5 percent), and 1.1 percent as Native American and Native Hawaiian (vs. 1.6 percent).

“A new concentration in Theater, Dance & Media, the reopening of the Harvard Art Museums, and vibrant theater opportunities, including the American Repertory Theater, have met with great enthusiasm on the part of prospective students,” said Marlyn McGrath, director of undergraduate admissions. “In addition, the Harvard Paulson School of Engineering and Applied Sciences and its extensive opportunities — along with the Innovation Lab — have attracted more promising engineers and computer scientists than ever before.”

Harvard’s leading financial aid program continues to send a strong message of access to outstanding students from all economic backgrounds. Since launching the Harvard Financial Aid Initiative in 2005, Harvard has awarded nearly $1.6 billion in financial aid to undergraduates.

“Financial aid remained critically important to prospective Harvard students. Many used Harvard’s easy-to-use net price calculator to determine that Harvard was a realistic possibility for them,” said Sarah C. Donahue, Griffin Director of Financial Aid. More of those admitted early this year were estimated by staff to have high financial need, and slightly higher numbers of first-generation college students were admitted (8.7 percent vs. 8.2 percent).

Harvard costs the same or less than most public universities for 90 percent of American families, and students can graduate debt-free because no loans are required. One in five Harvard families has an annual income of less than $65,000 and pays nothing toward the cost of their students’ education. The average family contribution for a financial aid student is $11,640. Families with incomes up to $150,000 and typical assets pay 10 percent or less of their annual incomes. In addition, families with higher incomes can receive need-based aid, depending on individual circumstances.

“It is still too early to know exactly how many of the admitted students will need financial aid, as many students’ financial information is incomplete,” said Donahue. “Ultimately, we expect that the majority of students will be awarded need-based aid.

“Our new $2,000 start-up grants for students whose annual family incomes are less than $65,000 have received a great deal of attention as we have recruited nationally and internationally this year,” she said. Under this program, students receive $1,000 when they arrive in August and another $1,000 in January to help them with expenses during their transition to college.

As part of the financial aid program, Harvard spent $3.3 million in 2015 to help students pay for health insurance, books, travel costs to and from home, fees for events, performances, activities, and more so that every student could engage fully in a Harvard experience. These investments are reflected in the many accomplishments of the aided students, as well as in their 97 percent graduation rate, which is the same as their classmates’.

“Recruitment in all of its forms was vitally important in attracting such a strong early admission group this year,” said Anne De Luca, associate dean for recruitment. “In addition to traveling to 150 locations throughout the United States to meet with students and families, we have also conducted international travel. We are most fortunate to be able to call on our nearly 10,000 alumni and alumnae around the nation and the world to help us with recruitment at the local level.”

Faculty members will provide information about academic and research opportunities both in the College and across the University, emphasizing the One Harvard concept that helps ensure that students have a complete picture of what awaits them. Admissions staff members will write personal notes to all admitted students, encouraging them to consider Harvard as their college choice.

The deadline for regular action admission is Jan. 1, and students will be notified of admissions decisions on March 30. Students admitted under both the early action and regular action programs have until May 1 to reply to their offers of admission.