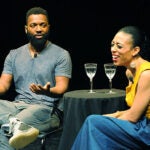 Some people dream of endless golf games when their career comes to a close, but the Harvard Advanced Leadership Initiative (ALI) has a different vision.

Instead of considering retirement an end point, the initiative works to foster an environment for successful baby boomers to make retirement a starting point to help change the world.

Conceived in 2009 by Rosabeth Moss Kanter, the Ernest L. Arbuckle Professor of Business at Harvard Business School, Rakesh Khurana, now the Danoff Dean of Harvard College, and Nitin Nohria, now dean of the Business School, the program creates a “third stage in higher education” and allows accomplished professionals to utilize their leadership skills in the social sector.

Participants focus on a project that inspires them and, making use of the University’s vast resources, spend the year working to get their project off the ground.

On the verge of ending one career and thinking about her next steps, Patricia Chadwick, ALI Fellow ’16, sat chatting with a woman at an International Women’s Forum luncheon. “She told me, ‘I just had the most transformative year of my life. I attended Harvard’s Advanced Leadership Initiative.’ That was all I needed to hear.”

As senior vice president of global concessions and new business development at Bloomingdale’s, Chadwick came to ALI knowing that she had the necessary leadership skills and ability to bring people together and get results.

Her project, “Purposeful Aging: Creating a New Narrative for Ways of Life,” works to leverage the 55-plus generation to help solve problems in urban education.

Knowing that many others have tried to tackle these issues, Chadwick decided that she needed to better understand the terrain. “You have to be really careful to be narrow and explore the landscape — but don’t try to ‘boil the ocean,’ as we used to say in my professional life,” said Chadwick.

Meeting with government officials, educators, thought leaders, executive directors, and others, Chadwick developed a broad-based knowledge of what’s happening in education reform and connected with Ann MacDougall, a graduate of the initiative and president of Encore.org. With the vision of “a future where the second half of life is dedicated to supporting the next generation in ways that benefit old and young alike,” Chadwick found the perfect match in Encore.

This December, Encore will launch “Generation to Generation,” a social action campaign geared toward mobilizing adults over 50 to “stand up and show up for young people, support innovative pilots in cities and organizations around the country, and change the national conversation about intergenerational relationships in America.” With Chadwick’s help to create the framework for the launch, the Encore Boston Network will bring together local stakeholders to gain support and ensure success. According to Chadwick, she will “ensure that the launch has got teeth and some real grip within the community.”

Eager to bring some of their “good thinking to life by leveraging the skills that I have through my career,” Chadwick feels lucky to have connected with others who share her passion.

Akhil Gupta, senior fellow ’16, wasn’t quite sure where his next chapter would lead him. But once he started the program and enrolled in Professor Brian Hehir’s “Religion and World Politics” course at Harvard Kennedy School, his mission became clear.

“The amount we have learned in science and technology just absolutely amazes me. Equally amazing is the fact that on an interpersonal and personal basis, frankly, we have not made that much progress,” said Gupta, who was selected by the initiative to come on board for another year.

Gupta’s project focuses on integrating knowledge across religious and cultural borders. “If we can integrate knowledge across the silos of time, civilizations, geographies, and academic disciplines without any pride of ownership, we can create a second and truer Enlightenment leading to realization of our full human potential,” said Gupta.

Although he has plans for a book after he finishes the program, Gupta wants to avoid putting deadlines on himself. As senior managing director and chairman of Blackstone Advisors India Private Ltd., he dealt with a number of pressures, but he believes that in this new stage of his life it’s important for him to “go with the flow.” Still, he added, “I’m a very driven person, so the deadline is coming from inside. It’s much more powerful than being successful or making money.”

His book will integrate what he has learned through the years and “crystallized through the ALI platform.” By taking classes in neuroscience, evolutionary biology, and social psychology, Gupta has been able to better understand the human journey.

Growing up in India, Gupta said his parents exposed him to all walks of life. “Because of my upbringing, I have the luxury of stepping away from the system that defined me,” said Gupta, adding that his main concern is how to enable humanity to flourish and to rid the world of exclusivism.

“I think we were able to live without understanding the other person for so long because we were not interconnected. But now that we are, the world is getting smaller, and smaller in every sense that we need to go beyond just tolerance and embrace diversity,” said Gupta.

Chadwick and Gupta’s missions focus on different topics, but the two understand the necessity of looking beyond their careers and making important societal changes.

A few years before he left Blackstone Advisors India Private Ltd., Gupta knew that he wanted to apply his mind to issues that he hadn’t had time to think about. Chadwick realized that the dedicated time provided by the initiative to learn and collaborate was just what she needed. “In hindsight, I think I was just so engrossed in my work that I never gave myself permission to even think, explore, or challenge myself on where I wanted to go in life, post-career,” she said.

Chadwick and Gupta say the initiative’s professors and cohorts have played an instrumental role in finding their inspiration. “The validation and encouragement from the participants was a tremendous help,” said Gupta.

Last spring, the initiative launched The Coalition, a network that helps strengthen the ties and collaborations between past and present fellows. On Nov. 17, The Final Symposium marks the entry point for the 2016 Fellows into the ALI Coalition.

“We’re from all over the world,” said Chadwick. “We’re from different industries and cultures, and we all came with the same mission in mind: to learn, grow, and do good.”