The shifting landscape in biosocial science 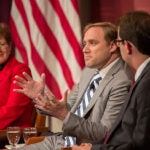 In Tanner Lectures, professor will examine how society leaned on flawed judgments about race, and how they're changing

Professor Dorothy E. Roberts of the University of Pennsylvania Law School, a leading scholar on legal and biosocial theory, will present this year’s Tanner Lectures at Harvard on Wednesday and Thursday. Her two-part talk will examine a profound shift in biosocial science, and its effects on theories of race and social inequality.

Founded in 1978, the Tanner Lectures focus on human values. “Those values of course change historically and even geographically in different phases,” said Homi K. Bhabha, director of the Mahindra Humanities Center. “We bring to our campus speakers who, from their different disciplinary perspectives, have something to say about the transformation in cultural and ethical values around a particular topic. Roberts brings together a wide range of expertise, and also a range of perspectives that makes her work transdisciplinary. And it speaks to many parts of the campus on issues that are relevant at this point.”

Reached before her Harvard visit, Roberts, J.D. ’80, explained the focus of her talk. “What I’ll be doing is looking at the ethics of biosocial science — which as I define it is science that investigates the relationship between biology and society,” she said. “I point out that there is a difference between science that claims that biological difference produces social inequalities, and science that claims social inequalities produce biological differences. That is the distinction I’m making between the old and new theories.”

In the first lecture, “The Old Biosocial and the Legacy of Unethical Science,” she’ll examine how science was affected by outdated — and sometimes preposterous — theories about race.

“I point out that race is an invented category that was promoted by scientists in the late 1600s and early 1700s. They invented the concept of race as a biological difference in human beings, and this happened before scientists even knew anything about genes. This was inherited and passed down from one generation to the next. And the claim that race is a biological trait, rather than a political division, justified the enslavement of Africans in a nation that was based on the radical commitment to liberty and equality.”

Even after slavery ended, the idea persisted that some humans could be genetically inferior. As Roberts pointed out, the 1927 Supreme Court case of Buck v. Bell put that theory into high relief. “The case considered the constitutionality of the compulsory eugenics sterilization law that allowed the government to sterilize people against their will, if they were found to be feeble-minded. Justice Oliver Wendell Holmes wrote the opinion upholding the law, based on eugenicist science. He thought it would be better if these feeble-minded people were sterilized, rather than having to execute their children for their crimes. The children were thought to damage the stock of the nation and make it a weaker society. And the difference was then linked to whole groups of people who were seen to be genetically inferior.”

Her second lecture, “The New Biosocial and the Future of Ethical Science,” will examine the thinking since then, as eugenics have generally been discredited. One key discovery, she said, is that genes may actually react to the environment — that a parent’s living conditions may determine her child’s genetic makeup. The new science of epigenetics investigates how body cells function, and the effect that physical surroundings may have.

“The revolution in biosocial science is that the distinction between nature and nurture isn’t tenable anymore, because scientists are learning that genes don’t operate by themselves, they respond to the environment. And that absolutely includes where you live, the toxins you breathe in, the stress that you experience, your diet. All of this affects the epigenetic process in your cells.”

Roberts cited the higher rates of low birth weight and cardiovascular disease among African-Americans. “There were assumptions that there was a genetic predisposition causing that. But epigenetic scientists have now shown that the stress of various aspects of racial inequality — segregated neighborhoods, lower incomes, and even the stress of discrimination experienced by a black mother — can have an impact on the fetus and cause them to have smaller babies. And these babies grow up to have a greater risk of cardiovascular disease. This is not because of the gene structure, but the way these adverse environments affect pregnant African-American women.”

Eugenics still has its proponents, so the new science hasn’t completely replaced the old. Roberts said there was no particular event that led to a scientific shift, but “I could definitely name some of the influences, though. For one thing, after the Holocaust there was a global rejection of eugenicist thinking, because of the realization that attributing group inequality to innate differences could lead to horrific government actions. Another factor was the development of science — particularly neuroscience, which examines how social environment affects the actual anatomy of the brain.”

In the final part of her lecture, Roberts will look at how biosocial science is likely to evolve. “This research I’m talking about is still relatively new. What’s controversial with human beings is how durable and transgenerational these effects are. We start by looking at the old science, aspects of which are perceived as unethical. But what was unethical about it: That it led to sterilization of groups of people? Yes, but there was also something flawed in the scientists themselves — not that the science fell into the wrong hands, but that the science itself was unethical. It’s a demonstration of the power and the violence that it takes to hold unequal social hierarchies. There is potential for the new science to be more ethical than the old. Part of my lecture is to point out how radical this new science is, but also how it incorporates some of the flaws of the old.”

Asked if there was a particular moment when biosocial science took a leap forward, she said, “I think we’re seeing that moment right now.”

The Tanner Lectures will take place Wednesday and Thursday at 4 p.m. in the Lowell Lecture Hall. Dorothy Roberts will be introduced at the first lecture by Harvard President Drew Faust and then by Law School Dean Martha Minow, who co-authored “Women and the Law” with Roberts.