Taking the stigma out of poverty 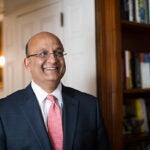 ‘I had this extraordinary sense of liberation’

Two-day panel looks at social exclusion, and how to eradicate it

“Social Inclusion and Poverty Eradication: A Two-Day International Workshop” is being held today and Friday. It will bring together international experts in both poverty analysis and those whose work focuses on group discrimination, stigma, and exclusionary relations. Participants will assess the contribution of social inclusion policies, from affirmative action, inclusionary housing, and group rights, to basic income and social protection floors. For a full agenda, visit the website.

Today and Friday, an international panel will come together at Harvard’s Center for European Studies for a two-day workshop titled “Social Inclusion and Poverty Eradication.” The talks will examine how different forms of exclusion contribute to the spread of poverty, and how social, political, and economic inclusion may reduce it.

“The idea is to create bridges between anthropologists, economists, lawyers, and others who are working on poverty inequality on various parts of the planet,” said Michèle Lamont, director of the Weatherhead Center for International Affairs, who helped organize the conference along with Hilary Silver, professor of sociology, urban studies, and public policy at Brown University.

A key issue for Lamont is how the poor are stigmatized, and how that itself fosters poverty.

“One example would be the perception of welfare mothers in the U.S.,” she said. “If you were to Google images and look for welfare mothers in Israel, you’d see a beautiful, blonde, healthy mother — that’s a celebration of the Zionist ideal of building the nation through a high fertility rate. But in America, you see the oppressed African-American mothers at the bottom of the social ladder.

“Another example would be food stamps. In France, for instance, there are benefits available to any family that has three or more children; this addresses poverty, but it’s also seen as a universal right, one that you don’t even have to use. In America, before food stamps became electronic, you had to use them in a store and there was a real element of stigmatization.

“The difference is how the poor are viewed: Is their experience tied to individual failure to pull themselves up by their bootstraps and live the American dream? Or is it really the product of forces beyond their control?

“This construction of the poor in society has many ripple effects,” she said. “The more morally stigmatized the poor are, the less people are inclined to support any kind of redistribution.”

Lamont cited Jennifer Silva in “Coming Up Short,” who wrote that in the United States, unemployment is tied to a negative sense of self. She said Silva found “that the unemployed use a language of self-help that isn’t far from Alcoholics Anonymous: ‘You have to find your passions within yourself.’ And that denies the structural forces that might have led to their unemployment.

“This to me is related to Trump’s victory: The lower middle classes supported him, not understanding very well the structural causes that led to the decline of the American economy,” she said.

In other cultures, the exclusion can be more literal. In a separate interview, Silver noted that indigenous people in Sweden who live near the Arctic Circle are likelier to be poor because they are excluded by physical distance. “Another example would be the disabled, who may lack the spatial access to a building, or the lack of educational opportunities,” she said.

Affirmative action can vary in different countries, Silver said. India, for instance, now has work positions reserved for the former untouchables of the lower castes. “The meaning of social inclusion varies in different societies, and which minorities are excluded depends on the national context,” she said. “But the ways in which minorities are treated have a lot of similarities throughout the world.”

The panel is drawing representatives from around the world to Harvard. Keynote speaker Vijayendra Rao is a lead economist in the Development Research Group of the World Bank, “an unconventional economist in that much of his work is about low income rural villages in India,” said Lamont. “He’s been looking at interventions that allow low income people to participate in communal decision making — not just teaching them to fish, but giving them a say in how the villages are run.”

The five-part workshop will mark one of the first times that specialists from South Africa, Greece, Italy, and other countries has met to discuss these issues. “We’re also taking an inclusionary approach to this conference,” said Silver. “You don’t often see this kind of interdisciplinary stew.”

For more information about the event, see here.