Siyani Chambers: Back on point 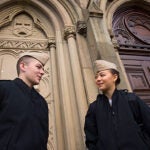 Siyani Chambers was coming off another huge Harvard season. In March 2015 the junior point guard had helped take Harvard back to the NCAA Tournament, where the Crimson almost knocked off fourth-seeded North Carolina in the second round.

A starter as a freshman, the Ivy League Rookie of the Year, and a regular All-Ivy League honoree, Chambers had racked up more than 1,000 points in his three seasons, which included three trips to the postseason. His senior year looked bright. Then, just weeks before it began, the unthinkable happened.

“My knee just gave out,” recalled Chambers, who was going for a layup during a noontime pickup game when he felt his left knee buckle beneath him. Still, the Leverett House resident, who was in Portland, Ore., for an Adidas internship, wasn’t worried.

“I got up and kind of walked it off. I went back to my room. I got the rest of the day off and it felt OK.”

The next day a doctor checked the stability and range of motion in the knee. He told Chambers that it was likely just a hamstring injury. Chambers stayed off of it, hoping rest was all that was needed.

It needed much more.

The results from an M.R.I. in his hometown of Golden Valley, Minn., indicated what every athlete dreads — a torn anterior cruciate ligament (ACL), the band of connective tissue that stabilizes the knee when planting or turning. A severe tear typically requires surgical reconstruction and several months of rehabilitation. Soon, a second test confirmed the worst: Chambers had blown out his ACL.

“I was devastated. I’ve been fortunate enough not to have an injury like this … and I didn’t really know how to react,” said Chambers, a sociology concentrator. “It was really sad because I really wanted to be here with my teammates, and help the team as much as possible.”

Due to Ivy League regulations that prohibit student-athletes from taking a year off from their sport while remaining enrolled in classes (“red-shirting”), Chambers decided to withdraw entirely from Harvard for a full academic year to preserve his playing eligibility. He said that while choosing not to graduate with his class was a tough decision, not playing his final year with the Crimson was never an option.

“In my family we are big on loyalty and commitment, and I committed my freshman year to come here and get a Harvard degree and be a student-athlete. And it was a no-brainer.”

He had surgery in September 2016 in Minnesota, and spent the next few months recuperating at his parents’ home. From their couch he watched Harvard basketball games on TV, sending cheers and support via text. It made a difference — but only to a point.

“I like to be there with my teammates helping any way I can,” he said.

In January, Chambers moved in with family friends near Boston. He spent his days rehabbing at Massachusetts General Hospital, where leg presses, hamstring curls, jumping, cutting, band resistance exercises, and “a lot of stretching and ice” became the norm. He worked out on his own and with his brother, Kamali, a guard for Boston University. In June he started running. In July his doctor cleared him to play. Chambers didn’t hesitate, taking part in an intense six-week summer workout program.

Still, Chambers worried about putting his knee to the test. But it didn’t take long for him to find out how it would hold up.

During a grueling training session at Harvard’s football field Chambers hit the turf in the middle of an agility drill. It was the best thing that could have happened. He bounced right back up. The knee felt fine, and he knew he was “ready to compete back at this level.” (That competition got underway on Friday, in a loss to Stanford in Shanghai.)

The preseason gave Chambers, a co-captain,  a chance to build “relationships with the freshmen and the guys that were on the team last year that I didn’t know.” His personal goal for the season is to surpass his pre-injury level of play. When it comes to team goals, Chambers refers to a board in their locker room that reads: “Never have a bad practice; Win the Ivy League; Advance in the NCAA tournament” — and “Have fun.”

“Whatever’s on that board,” said Chambers, “is what I am hoping to accomplish.”

At a recent practice at Lavietes Pavilion, Chambers was back in his familiar role as the team’s on-court organizer, calling plays and directing traffic. To the casual observer, nothing had changed — the senior point guard was in his usual fine form. A pair of black leggings covered up the scar on his left knee, the only indicator of the turn his life had taken over the past year.

But for one spectator, standing at center court on the giant Crimson “H” with a whistle around his neck, something was decidedly different.

“Siyani has been as important as anyone in our program since the day he arrived,” said head coach Tommy Amaker. “We are excited to have him back as our quarterback and our leader.”