Getting to the truth of blood libel 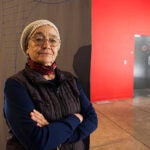 In winning Phi Beta Kappa’s 2016 Ralph Waldo Emerson Award for “The Murder of William of Norwich,” E.M. Rose found recognition by illuminating the real history behind an imaginary event.

Rose, currently a visiting scholar in the program in medieval studies, was honored by the society for her “model of thoroughgoing historical scholarship.”

“I’m bowled over,” said the former TV journalist, whose book analyzed the earliest known blood libel in medieval England and its impact on future accusations around Europe. “Most people previously writing on the topic wanted to know ‘Did they or didn’t they?’ I came at it asking, ‘Why did people believe such a strange and pernicious accusation? What were the circumstances?’ I thought it had been done to death, but I kept finding such interesting research.”

Rose’s gripping tale gets to the heart of a terrible slander — that Jews tortured children in mockery of Christ and the Crucifixion, and used their blood for ritual purposes — and examines how it was invented, embellished, and transmitted. The book transforms deep scholarship into a vivid courtroom drama involving a bankrupt knight, an ambitious bishop, an earnest monk, and an enterprising banker, identifiable people at the heart of medieval urban life.

Rose worked as a producer for CNN for 10 years. Over the next 10 she raised four children while turning her doctoral dissertation into “The Murder of William of Norwich.”

“This award gives me credibility to speak out for people who take a different path toward being serious historians, and I’m so thrilled that the award recognizes that you don’t all have to have the same professional trajectory,” she said. “It’s a great challenge to write an important book for a large audience and one that is also well-regarded by scholars. In our field, there is growing bifurcation into extremely narrow studies by specialists or popular works that are not always esteemed by academic readers. It is really exciting but demanding to write for both.”

In Rose’s book, the death in 1144 of an apprentice leather worker plays out in a riveting narrative, most notably five years later in a courtroom trial after a knight kills a Jewish creditor.

“The book hits many of the compelling concerns of the high Middle Ages,” said Rose. “It’s about identity, national politics, state building, and finance. People always thought the blood libel was an eccentric belief that was marginal, but it turns out to be central to many issues in medieval studies.”

Rose makes her case by interpreting the rumors surrounding William’s death as the groundwork for subsequent “copycat” cases that reached as far as Paris.

“It starts with a bare-bones accusation no one believes and is gradually elaborated with more and more detail, color, and character,” she said.

Jeffrey Hamburger, the Kuno Francke Professor of German Art and Culture and former chair of Harvard’s Standing Committee on Medieval Studies, described the Emerson recognition as “marvelous, and more wonderful when it happens to someone who has had such an untraditional career.”

“It’s a great story very well told,” he said. “She puts a very new frame on the material, and the quality of the writing matches that of the research.”

Rose had her first child two weeks before earning her M.B.A. at Columbia University, and her second while taking general exams at Princeton for her Ph.D. Over the next several years she juggled parenting alongside teaching at Johns Hopkins University, Rutgers University, and City University of New York.

Her prize-winning book went to press only after her youngest child went off to college.

“Some friends didn’t ask me for years about my work. They thought it would be awkward or embarrassing. I didn’t have writer’s block. I had children. They’re not the same thing,” she said. “I’ve never regretted it. Studying very difficult and gruesome subjects, it was always reassuring to come home and see wonderful kids.”