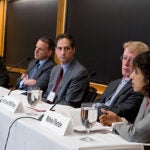 Carbon-capture technology and nuclear power are two potential areas of bipartisan agreement on the environment over the next four years, a period in which progress will likely be slow, according to a former top U.S. Environmental Protection Agency official.

With the White House and Congress controlled by Republicans who have questioned whether climate change is real, the prospects for comprehensive national policies and a price on carbon to encourage emissions reductions are vanishingly small, said Robert Perciasepe, who now runs a nonpartisan think tank, the Center for Climate and Energy Solutions, after years of service as deputy EPA administrator under President Obama.

But smaller opportunities exist, he said.

A significant portion of the world’s power still will be provided by fossil fuels in the decades to come, making technology to remove carbon from their emissions critical if climate change is to be addressed.

“There will be coal plants burning in 2050,” said Perciasepe, speaking Tuesday at the Center for Government and International Studies during an event sponsored by the Harvard University Center for the Environment. “There is no scenario that gets us to zero by the end of the century that doesn’t deal with those plants.”

Carbon capture is important not just for coal plants, he noted. Industrial emissions also need to be addressed, and carbon capture could help. He offered the example of Ford, which this year announced plans to use carbon dioxide captured from its own emissions to create new foam and plastic components for seats and vehicle interiors.

It’s also important, Perciasepe said, for the United States to maintain its existing fleet of nuclear power plants — which release no carbon dioxide — largely because the most likely replacement, natural gas, is a fossil fuel that would increase carbon dioxide emissions. 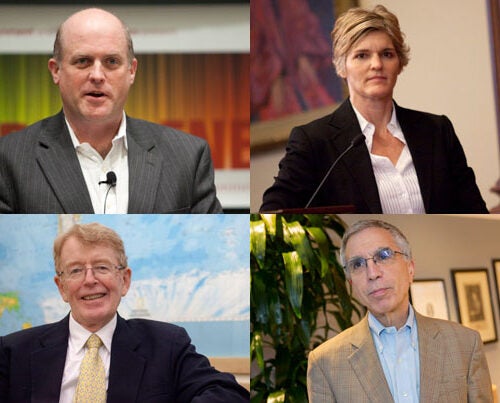 A Trump administration can do plenty to undercut Obama’s efforts, but it could compromise too, Harvard analysts say

Though replacing nuclear power with natural gas is seen as environmentally harmful, that’s not the case when gas replaces coal, another positive trend Perciasepe expects to continue. New natural gas supplies released by hydraulic fracturing have created a cheaper alternative to coal and created market incentives to replace coal plants with gas, which releases about half the carbon dioxide as coal for a given amount of energy.

Perciasepe acknowledged a gloomy picture for environmental policy at the federal level. President-elect Donald Trump has threatened to withdraw the United States from the Paris Agreement on climate change and unravel Obama’s Clean Power Plan. He could open federal lands to drilling and make the EPA, charged with enforcing some of the country’s most important environmental laws, a target. Though abolishing the agency would be difficult, it could be rendered dysfunctional through funding cuts and other measures.

“I don’t underestimate the loss of momentum that could occur,” Perciasepe said. “We have to redouble our efforts.”

But Perciasepe emphasized openings for progress against climate change. The market forces driving the replacement of natural gas with coal are unlikely to dissipate. Trump’s support for national infrastructure projects could revamp the power grid so it can carry renewable power from the windy plains and sunny southwest to power-hungry cities. Advances in technology have made electric cars more attractive to consumers.

The venue for action in the next four years will likely shift to states, 10 of which already have a price on carbon; to individuals, who have the potential to exert vast pressure through their consumer choices; and to businesses like Ford.

“I could go on and on about all the things that are happening out there,” Perciasepe said. “Do we think all that is going to stop?”