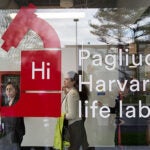 In 1816, when Harvard Divinity School (HDS) was established, its founders aimed to ensure that “every encouragement be given to the serious, impartial, and unbiased investigation of Christian truth.”

Two hundred years later, HDS has expanded its mission. With more than 30 traditions represented, from Islam to Buddhism to the non-affiliated, the School has become a veritable mosaic of religions that go beyond Christianity.

To track the evolution of the School over the past two centuries, the Gazette interviewed Dean David N. Hempton, the Alonzo L. McDonald Family Professor of Evangelical Theological Studies and John Lord O’Brian Professor of Divinity. A Belfast-born social historian of religion, Hempton also talked about the School’s first and recent graduates, changes in the world’s religious landscape, and the role of religious literacy in building peace.

GAZETTE: Who were the School’s first graduates?

HEMPTON: Most of the graduates from those early years were preachers and religious leaders, but many became teachers, college presidents, editors, writers, politicians, and diplomats. Many of them were involved in philanthropic endeavors, poverty relief, asylum reform, and they also took part in the abolition movement. An interesting fact is that many of our graduates from that period achieved significant distinction and they were included in the Dictionary of American Biography.

GAZETTE: How do those early graduates compare to the past few years’ graduates?

HEMPTON: Quite like the early classes, our recent graduates have mostly become educational, religious, and professional leaders while some have become writers, editors, and artists. They go to graduate school, run NGOs, and get involved in philanthropic causes throughout the world. As a historian, I find it interesting that while things have changed dramatically over time, there are some threads that continue. We’re still a progressive institution that is socially engaged and concerned with questions of meaning and purpose. We’re still a nondenominational divinity school, and we still have one of the country’s strongest ministry education programs, but we are also one of the top feeder schools for doctoral programs in religion and we prepare religiously literate professionals for all kinds of leadership roles.

GAZETTE: What about the School as an institution? How has it evolved over 200 years?

HEMPTON: What’s remarkable about those early days is how small the Divinity School was. In the 1820s and ’30s class size rarely exceeded 20 students, and now we graduate over 100 every year. It was a small place, and of course it was male, white, and it was more of a liberal Protestant tradition. And now it’s a school of 400 students, and half of them are women, and a substantial proportion of them are from racial and ethnic minorities. A strong number of students are international, and over 30 religious traditions are represented in the School. So the School is bigger, more diverse, more representative of the broader population, and has become multireligious.

GAZETTE: What’s the role of a Divinity School in today’s world? Why is it important to study religion?

HEMPTON: There is a historical argument to be made. It’s impossible to understand past civilizations without understanding religion. Religion is a major part of the history of civilization, but it’s also the lived experience, the faith and practice, of the great majority of the world’s populations. Why wouldn’t that be important? Also, we’re entering a complicated world order, which is going to be increasingly pluralistic religiously as part of the globalization process and population migrations. We’re trying to educate people to be religiously literate in the best sense of the word, because we’re going to need people who understand how to deal with that greater pluralism, leaders who understand more than one religious tradition, not merely in an algebraic way, in the sense of symbols and equations, but with a deep empathy and understanding of what those traditions are and why they’re lived, dynamic, and life-shaping.

GAZETTE: Some people still think that there will be a clash of civilizations between Islam and Christianity. What is your take on this?

HEMPTON: Growing up in Northern Ireland, I came to see how dangerous it could be to construct “essentialized” stereotypes of “the other,” and how some can flatten out the other’s beliefs and practices to fit into their preconceived ideas of what the other’s are. At our school, we want to bring to the attention of our students that it’s very dangerous to see religions with a preassigned set of fixed categories, and that’s also true in the United States, where there are unacceptable levels of Islamophobia. The best antidote to stereotypes based on ignorance is education and building relationships, and bringing people together. All religious traditions are sources for the noble things we see in life — meaning, love, compassion, forgiveness, generosity, and hospitality. At the School, as part of our Religions and the Practice of Peace Initiative, we want to explore different religious traditions and what their contributions might be to peace-building.

GAZETTE: The world is increasingly becoming more secular. What does that say about religion’s role in the 21st century?

HEMPTON: Religion is still a primary organizing principle in people’s lives, and especially outside the more secular regions of the world. It’s a big part of the world’s order not only in terms of identity, but also how religion intersects with other frameworks, such as politics, economics, international relations, etc. A 2012 survey by the Pew Research Center on the global religious landscape found that 84 percent of the world’s population identify with a religious group. It’s true that the religiously unaffiliated, the so-called “nones,” are growing. It’s the fastest-growing category in the United States now, but Christianity and Islam are also growing. Experts predict that by 2050, about 66 percent of the country will be Christian of some kind, another 25 percent will be unaffiliated, and the rest will be made up of Muslims, Buddhists, and other religious traditions.

GAZETTE: You’re a historian. What sparked your interest in religion?

HEMPTON: I grew up in Belfast, went to the university there in the 1970s when the “Troubles” broke out. I was raised in a churchgoing family; my mother was a devoted churchgoer and expected the same from her children. So I saw how religion could be a source of both good and bad. In my own family, religion seemed to be a force of goodness, decency, compassion, and responsibility. But living in Northern Ireland, I also saw how religion could be a source of conflict, division, and violence, and how it intersected with other categories like national identity, political views, economic access to resources, equality before the law, and job discrimination. Religious labels meant something, whether people were actually churchgoers or not. I look at religion and I see how its various expressions can be divisive, but I also see it as a source of tremendous spiritual resources, values and meaning, neighborliness, and human compassion.

GAZETTE: In 100 more years, what do you think the role of religion will be in people’s lives?

HEMPTON: Historians are not prophets, but the best answer I can come up with for that is that religion will continue to be a primary organizing principle in people’s lives. The Pew Center projection states that by 2050, two-thirds of Americans will self-identify as Christians, and Islam will be the second-largest religion in the United States. Europe is projected to be 10 percent Muslim, and four out of 10 Christians worldwide will be Africans. As for the School, we like to think of ourselves as illuminating, serving, and engaging, and we need to think about what communities we’re going to serve in 100 years because religion is changing under our very eyes. We have to think about why so many mainline Protestant churches and seminaries are closing. How is Catholicism changing because of the influx of Hispanics and Latinos? How is Islam going to grow? And in what way will the United States become a society with more religious pluralism and greater numbers of people unaffiliated with any religious tradition, but still interested in spirituality? At this 200th-birthday moment, we look at where we’ve come from, and we look at where we’re going. We’re more diverse, multireligious, but we’re also interested in ministry formation, and in religion as a serious scholarly pursuit as well as a lived practice. No one sitting where I’m sitting now in 1816 or 1916 expected the Divinity School to look like the way it is now. Many of the changes the School has gone through have been driven by students, and this will continue. Some dean in 2116 is going to look back on the previous century and think, “If only they knew!”