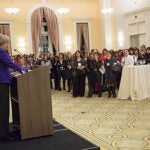 After a long, loud, bruising, even exhausting political campaign, the country awoke to the traditional calm that is Election Day. It was finally time for Americans, if they hadn’t voted early, to make their choices for president, Congress, local offices, and ballot questions.

The election dominated campus discussions and scheduled events at Harvard, too. Here are some snapshots from the day.

On edge at forum

As the results trickled in — first favorable to Clinton, then to Trump — the crowd at the Kennedy School’s JFK Jr. Forum was rapt, but subdued. Watching multiple TV screens, large and small, the tension seemed contrary to the colorful decorations all around.

Red, white, and blue bunting and state flags hung from the railings on the second and third floors overlooking the forum. Cardboard cutouts of the candidates decorated the stage and two large mesh tubes were suspended high above the floor, ready to drop balloons on the crowd once a winner was declared.

Anne Carlstein, a College freshman and Clinton supporter, kept an eye on progress in her home state of North Carolina. The campaign, she said, was difficult to watch beginning in the primary season, and almost from the start “didn’t seem presidential.”

“I’ll be so relieved when the election is over,” Carlstein said.

In a lecture hall off the forum, several members of the Harvard Republican Club gathered to watch returns. Declan Garvey, a senior and the club president, said the space allowed Republicans to gather away from the predominantly pro-Clinton crowd in the main hall.

The club, which in August announced it would not endorse Trump, was watching returns hoping Republicans would hold onto the Senate, Garvey said.

Sebastian Serra, an HKS student from Mexico, was nervous watching the returns. He was rooting for a Clinton victory and said it had been unsettling to see the U.S. turn inward during the campaign.

“For me it has been very sad,” Serra said. “I understand why that occurred, but the world relies on the U.S. to be a leader.”

After a brief rush as the doors opened at 7 a.m., Gund Hall, one of two Harvard campus buildings that double as city polling sites, was fairly quiet at mid-morning as poll workers awaited the student rush that typically comes later in the day. Gund, in Ward 7, Precinct 3, covers those living in the Yard houses, as well as Adams House. Quincy House, in Ward 8, Precinct 3, serves as the voting location for students and faculty in the River Houses.

Turnout citywide had already exceeded the usual numbers for city and state elections, due in part to the introduction of early voting, the Cambridge election commission reported.

Voting officials at Gund Hall expected things to go a lot more smoothly than in 2012. Winnie Williams spent much of her time filling out paperwork for students who weren’t registered to vote there.

“They probably were getting themselves into the database, but then they needed to take the extra step of printing something out and getting it to the Election Commission, which they never did,” said Dena Cherenson, the Precinct clerk.

This year, to ensure smoother sailing, Williams huddled right after classes began with Dean of Freshman Tom Dingman and the voter registration coordinator from Harvard Kennedy School so that students got the correct instructions during orientation and could meet the state’s Oct. 19 registration deadline if they hoped to vote in Cambridge.

“We had a lot of discussion about it,” Williams said. “[Dingman] was doing everything in the world so that they knew step-by-step what they had to do, so I don’t expect to have any of what we had last time. I think everyone will be where they are supposed to be.”

A mailed-in ballot, and thoughts on the future

Texas native Bryan Rodriguez is a first-year student at the Harvard Extension School, and mailed in his ballot two weeks ago. This is the second time Rodriguez is voting for president.

Rodriguez said he has been disappointed at the vitriol and the lack of cordiality among the candidates in the presidential election.

“I’m anxious for this to be over,” he said as he waited for someone at the Science Plaza Center. “No matter what happened, this election is going to alter the way we choose a president. Presidential candidates were supposed to have political experience, time spent in government. This opens the door for many different types of candidates, for better or for worse.”

Hailing from solidly blue Massachusetts, Osaremen Okolo ’17 found in working the phones a chance to feel like she was making a difference in the race.

Okolo was an organizer of an Election Day phone bank for the Harvard College Democrats in Boylston Hall’s Ticknor Lounge. By 2 p.m., she had spoken to 75 potential voters in several swing states, asking them whether they had voted and, if not, urging them to exercise their right.

Devontae Freeland ’19, campus outreach director for the group, said that enthusiasm was high. Ninety-nine students had shown up to work the phones by 2 p.m., matching advance sign-ups for the whole day. The effort was expected to continue through 10 p.m.

The College Democrats also sent out canvassers, on campus and to Durham, N.H.

On Election Day, a class on the presidency

In one of those odd coincidences that life can bring, Mary Brown ’17 cast her ballot before going to her “American Presidency” class, taught by Roger Porter, IBM Professor of Business and Government at Harvard Kennedy School.

“It’s been a crazy couple of months,” said Brown. “I’m glad to see it coming to an end.”

Inside a Harvard Hall classroom, Porter welcomed the students, saying, “I hope that all of you have taken the opportunity to vote.”

“Elections are very hotly contested,” he said before a packed room. “You wonder how people would react when it is over, and the winner is declared, and the airwaves are full of statements the two candidates have made about one another. This is not totally unusual.”

Porter compared the fierce animosity of this campaign to the 1988 contest between Michael Dukakis and George H.W. Bush. But he added that the two men now hold each other in high regard. Porter is a good friend of Dukakis and has a strong relationship with Bush, in whose administration he served for four years as assistant to the president on economic and domestic policy.

“They ran a very spirited and challenging campaign 28 years ago. There were a lot of things said that probably should have been left unsaid,” he said. “It’s going to be a big challenge after this election. We’ll see how well that goes.”

Then Porter started discussing the courts and the presidency, the topic of the day’s class.

A hope for unity in the months ahead

Megan Fitzgerald, J.D. ’18, said she had mailed her ballot to Louisiana, where she’s registered to vote. Fitzgerald said she found this tumultuous election “unprecedented.”

“I’m impressed by the number of moderate and conservative voters who agreed on the abnormality and significance of this election,” she said. “I hope that as a country we can unite in the next few coming weeks and months.”

At the Law School, a party either way

At Harvard Law School’s Wasserstein Hall, Tracey Daley, the School’s student activities coordinator, wanted to ensure that the night brought the community together, whatever the electoral outcome.

Students, faculty, and guests entering Wasserstein’s ground-floor lounge Tuesday evening were greeted by two large sheet cakes decked out with red, white, and blue balloons, along with stars made of frosting. The end tables were strewn with hats, headbands decorated with American flags, red-white-and-blue leis, and similar gear.

“When you throw in the funny flag hats, we want to make it more fun no matter which way it goes,” Daley said.

Students among the crowd of about 30o who gathered to watch returns said they learned a lot about the country during the campaign, and not all of it good.

“It has been helpful to see the core values of the American electorate,” said law student Emanuel Powell.

Catherine Dondero, a master’s student at the Harvard Extension School, spoke for several other in the room and said that, whatever the outcome, she’s glad to move on.

“I’m actually so happy that it’s finally over,” Dondero said.

Taurus Brown, a first-year law student, said he hoped the nation would follow up the election of its first black president with that of its first woman, showing that the nation’s  highest office is open to people of all backgrounds. But he wondered where the night’s tallies would end.

“I’ve never been this nervous in an election,” Brown said.