‘DNA is not destiny’ 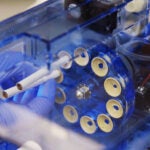 It is well known that a healthy lifestyle — not smoking, avoiding excess weight, and getting regular exercise — can reduce the risk of heart disease. But what about people who have inherited gene variants known to increase risk?

A study led by Massachusetts General Hospital (MGH) investigators has found that, even among those at high genetic risk, leading a healthy lifestyle can cut in half the probability of a heart attack or similar event. The report received early online publication in the New England Journal of Medicine to coincide with a presentation at the American Heart Association (AHA) Scientific Sessions.

“The basic message of our study is that DNA is not destiny,” said senior author Sekar Kathiresan, director of the Center for Human Genetic Research at MGH and an associate professor of medicine at Harvard Medical School (HMS). “Many individuals — both physicians and members of the general public — have looked on genetic risk as unavoidable, but for heart attack that does not appear to be the case.”

The multi-institutional research team analyzed genetic and clinical data from more than 55,000 participants in four large-scale studies. Three of these — the Atherosclerosis Risk in Communities Study, the Women’s Genome Health Study, and the Malmö Diet and Cancer Study — are prospective studies that have followed participants for up to 20 years. The fourth, the BioImage Study, assessed a variety of risk factors, including the presence of atherosclerotic plaques in the coronary arteries when participants joined the initiative.

Each participant in the current analysis was assigned a genetic risk score, based on whether they carried any of 50 gene variants that previous studies had associated with elevated heart attack risk. Based on data gathered when participants entered each study, the investigators used four AHA-defined lifestyle factors — no current smoking; lack of obesity, defined as a body mass index less than 30; physical exercise at least once a week; and a healthy dietary pattern — to determine whether participants had a favorable (three or four healthy factors), intermediate (two), or unfavorable lifestyle score.

For participants in the prospective studies, the researchers investigated how each individual’s genetic risk score and lifestyle factors related to the incidence of heart attack, the need for procedures designed to open blocked coronary arteries, or sudden cardiac death. Among participants in the BioImage study, genetic and lifestyle factors were compared to the extent of atherosclerotic disease in the coronary arteries at baseline.

Across all three prospective studies, a higher genetic risk score significantly increased the incidence of coronary events — as much as 90 percent in those at highest risk. While known risk factors such as a family history and elevated LDL cholesterol were also associated with an elevated genetic risk score, genetic risk was the most powerful contributor to cardiac risk. Each healthy lifestyle factor reduced risk. The unfavorable lifestyle group also had higher levels of hypertension, diabetes, and other known risk factors upon entering the studies.

“Some people may feel they cannot escape a genetically determined risk for heart attack, but our findings indicate that following a healthy lifestyle can powerfully reduce genetic risk,” says Kathiresan.

“Now we need to investigate whether specific lifestyle factors have stronger impacts and conduct studies in more diverse populations, since most of the participants in these studies are white.”