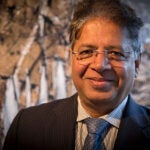 Renowned political philosopher Danielle Allen, director of Harvard’s Edmond J. Safra Center for Ethics, professor of government in the Faculty of Arts and Sciences (FAS), and professor of education at the Graduate School of Education, has been named a University Professor, Harvard’s highest faculty honor.

Her appointment as James Bryant Conant University Professor will begin on Jan. 1.

Allen is a political theorist and classicist whose interests focus on democratic theory, political sociology, the linguistic dimensions of politics, and the history of political thought. She has written extensively on concepts such as equality, freedom, friendship, and trustworthiness, often developing a revelatory picture of democracy.

“Danielle Allen is one of the most distinguished and creative scholars of her generation,” said Harvard President Drew Faust. “Her interests bridge an extraordinary range of fields, her ideas illuminate new avenues of scholarship and education, and her influence extends across the academy and well beyond. We are fortunate to benefit from her remarkable intellect, her humane vision, and her University citizenship, and I’m very pleased to welcome her to the ranks of our University Professors.”

A much-admired teacher, Allen has taught courses in a variety of subjects and is widely known for her work on justice and citizenship in both ancient Athens and modern America. She is the author of five books, most notably “The World of Prometheus” (2000), “Talking to Strangers” (2004), and “Our Declaration” (2014), for which she was awarded the 2015 Francis Parkman Prize. She has also written scores of scholarly articles and numerous essays and columns. Her current work focuses on the connection between education and democratic equality, as well as the significance of political equality for theoretical accounts of justice.

“I’m deeply honored,” said Allen. “It’s especially wonderful to be invited to hold a chair named after a field-changing academic leader and dedicated to supporting work that connects matters of civic character and education. The University has so many outstanding resources on these fronts; I’m grateful for the chance to connect all across campus. On top of that, the chair was formerly held by John Rawls! One always chases after one’s heroes, and I look forward to doing whatever I can to be worthy of this remarkable honor.”

Allen received her bachelor’s degree from Princeton in 1993 (summa cum laude, Phi Beta Kappa) with a major in classics. As a Marshall Scholar, she went on to earn an M.Phil. degree (1994) and a Ph.D. in classics (1996) from King’s College, University of Cambridge. She then pursued graduate studies at Harvard, earning an A.M. in 1998 and a Ph.D. in 2001. From 1997 to 2007 she served on the faculty of the University of Chicago, rising through the academic ranks to become a professor of both classics and political science, as well as a member of the Committee on Social Thought. While at Chicago, she also served as dean of the Division of Humanities from 2004 to 2007. She spent the next eight years as the UPS Foundation Professor at the Institute for Advanced Study in Princeton, before joining the Harvard faculty and becoming director of the Safra Center in 2015.

Her scholarly contributions have been widely recognized. She was named a MacArthur Foundation Fellow in 2001, in recognition of her combining “the classicist’s careful attention to texts and language with the political theorist’s sophisticated and informed engagement.” An elected member of the American Academy of Arts and Sciences and the American Philosophical Society, she chairs the Mellon Foundation board of trustees, is a past chair of the Pulitzer Prize board, and has served as a trustee of both Amherst College and Princeton University.

In addition to her teaching and scholarship, Allen has become an integral University citizen since her return to Harvard. She serves as co-chair of the newly appointed University-wide task force on inclusion and belonging, and is a member of both the Faculty Council of the Faculty of Arts and Sciences and the University’s Advisory Committee on Honorary Degrees. She has also been recognized for her outstanding teaching, earning high Q scores from Harvard students and having received the University of Chicago’s Quantrell Award for Excellence in Undergraduate Teaching.