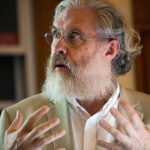 Works in patients on blood thinners or with bleeding disorders

Small blood clots called emboli are mostly known for traveling through the vasculature before they lodge and obstruct vessels, impeding blood and oxygen supply to organs such as the lung. To stop excessive bleeding or the flow of blood into an aneurysm, clinicians harness the same principle by forming artificial therapeutic emboli that can plug blood-carrying vessels. Using steerable catheters, they place tiny soft-metal coils or liquid embolic agents (“glues”) into the affected artery to block the passage of blood.

However, both procedures come with problems and risks. Coil embolization can be ineffective if the coil is not positioned or seized accurately, and coils need efficient blood clotting in patients to be stabilized. Liquid embolic agents, on the other hand, can be accidentally cemented to catheters or non-targeted areas due to insufficient control of their solidification. And, importantly, both types of emboli can become leaky over time.

A team of researchers at Harvard’s Wyss Institute for Biologically Inspired Engineering, Brigham and Women’s Hospital, the Mayo Clinic, and MIT now describe a new class of hydrogel-based embolic agents that could help eliminate all these drawbacks. Their study, published in Science Translational Medicine, provides proof of concept and first preclinical evidence in animal models that the shear-controlled hydrogel can be delivered by catheters and injected into blood vessels to form robust and safe blockages.

“This new approach to vascular embolization is based on a hydrogel composite with phase properties we can reliably control with mechanical pressure. It completely blocks vessels in situations where other methods can fail, such as in vascular areas that are highly convoluted or subject to unusual blood pressures, and, importantly, it still works when normal blood coagulation is impaired, like in patients receiving blood thinners or suffering from an intrinsic inability to efficiently form blood clots,” said Ali Khademhosseini, an associate faculty member of the Wyss Institute, and a professor at Harvard-MIT’s Division of Health Sciences and Technology and Brigham and Women’s Hospital.

In 2014, Khademhosseini, together with MIT Associate Professor Bradley Olsen, also an author on the present study, reported the so-called shear-thinning biomaterial (STB) and demonstrated that, when applied in bulk to larger wound surfaces, it can seal them off to halt bleeding.

The STB is a mixture of two components that form a malleable hydrogel: gelatin molecules and small discs of silicate nanoplatelets that mimic the function of actual platelet cells to promote blood clotting. When the STB is put under mechanical pressure, for example by pressing it through a syringe, it flows or “thins”; when the pressure abates, it again solidifies, this time creating a tight barrier.

In the present study, initiated with Rahmi Oklu, an interventional radiologist at Massachusetts General Hospital, the team investigated the possibility of delivering the STB via standard catheters directly within difficult-to-reach locations of the body’s vasculature to block blood flow in targeted vessels. Oklu is now an associate professor at the Mayo Clinic and co-submitted the study with Khademhossei to the journal.

Setting the stage, the researchers first optimized the formulation of the STB for effective delivery by clinical catheters and needles. They also tweaked the STB to ensure it gelled without any risk of inadvertent cementing to the delivering catheter, creating a complete blockage as well as confirming that the artificial clot still formed in the presence of anti-coagulants.

The optimized STB was taken into in vivo studies in mice and pigs with more human-like vascular architectures. “In the animals, we saw that STBs, delivered with standard clinical catheters into centrally located vessels, formed very effective casts, without leaking or fragmenting, excluding any risk of pulmonary embolisms down the line,” said Reginald Avery, the first author of the study, who did this work as a graduate student with Khademhosseini and Olsen. “Moreover, the induced embolization was biodegraded and remodeled into more natural tissue by infiltrating cells over time.”