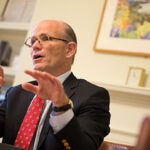 A budget surplus, but a cautious outlook

At a Meeting of the Faculty of Arts and Sciences on Nov. 1, 2016, the following Minute was placed upon the records.

Alex Dalgarno was a truly exceptional person and scientist. World renowned, he was widely considered the father of theoretical atomic and molecular astrophysics, a field that continues to thrive.

Born in London, a fraternal twin, the last of five children of his parents, Alex described his childhood as happy and contented. He especially enjoyed playing soccer. At the end of his secondary schooling, he was invited to try out for the Tottenham Hotspur Football Club in London. This event morphed into the local legend that he then faced a critical decision about whether to pursue a career as a mathematician or professional footballer. He made the right choice and proceeded to gain a bachelor’s degree in mathematics at University College London, capitalizing on his exceptional mathematical skills and prodigious memory. When Alex was about to graduate, a chance encounter in 1947 with Sir Harrie Massey, future chair of the Physics Department there, persuaded Alex to switch to theoretical physics for his graduate work. He seized upon this opportunity to use mathematics to interpret experimental data and thereby to solve interesting physics problems.

Alex completed his doctorate in 1951 and was offered his first professional appointment in Belfast by David, later to become Sir David, Bates.   At about the same time, rocket flights were making direct observations of the physics and chemistry of the upper atmosphere. To understand these data, Alex developed analytical and numerical techniques for calculating results from an array of radiative and collisional processes. Alex’s forays into perturbation theory, applied to the study, for example, of line broadening and the direct calculation of atomic and molecular polarizabilities became enormously fruitful in those years. Much later, in the 1990s, after Bose-Einstein condensates became feasible, Alex’s methods found new utility in understanding the collisional properties of quantum matter at temperatures near absolute zero.

After several long stays in the United States, Alex came permanently to Cambridge in 1967, having accepted a joint offer from Harvard as Professor of Astronomy and from the Smithsonian as Senior Scientist at its Astrophysical Observatory, then and still collocated with the Harvard College Observatory. It took little time for his extraordinary abilities to be appreciated. He was appointed Chair of the Department of Astronomy and served from 1971 to 1976, and, overlapping, Acting Director of the Harvard College Observatory from 1971 to 1973, with the last part of that period also as Acting Director of the Harvard-Smithsonian Center for Astrophysics. Alex also played an important role in the selection of George Field as its first director.

Nationally, he was recognized by being appointed in 1973 as Editor of the Astrophysical Journal Letters, a post he served with distinction for almost 30 years. He solved the huge number of problems attendant to that position, always rapidly, justly, and fairly; he opined that not only did he learn a lot of astrophysics in this position but that he “learned still more about people.” Alex also could say more in fewer words than anyone we have ever known. He was both extremely brief and very clear in his communications, oral and written, with all colleagues and mentees.

Not only his administrative contributions, but his research productivity, too, kept up a torrid pace; he published papers at an astonishing double-digit annual rate for many decades. In total, he published about 750 peer-reviewed scientific articles spanning his career of over six decades. There was hardly a subfield of aeronomy or astronomy to which Alex’s wide-ranging and fertile mind did not make an important contribution. The external world took notice and showered Alex with awards, such as the Davisson-Germer Prize of the American Physical Society in 1980, the Gold Medal of the Royal Astronomical Society in 1986, the Fleming Medal of the American Geophysical Union in 1995, and the Benjamin Franklin Medal of the Franklin Institute in 2013.

Alex was also an enthusiastic and serious athlete for almost all of his life. His passions, after soccer as a youngster, were squash and tennis. Until the Radcliffe athletic center was built, Alex would join a carful of fellow squash players every day at noon and head for the Hemenway gym, where he had a different partner for each day of the week. In the summer, he could usually be found on the Observatory tennis court in the late afternoon. He kept up this pace into his 80s. When puzzled colleagues posed the obvious question—given his enormous administrative load and his deep involvement in research and with students, how could he find time to play so much squash and tennis—his answer was immediate: “I make it my top priority.”

Alex’s personal life was more varied. His first marriage to Barbara Kane ended after 10 years; he and his wife had four children, Penelope, Rebecca, Piers, and Fergus, all of whom still live in the United Kingdom. A second marriage, to Emily Dalgarno, in the United States, also ended in divorce. He did have a companion for the last part of his life, Fern Creelan.

Alex felt that his true scientific legacy was not his scientific publications, but the more than 100 graduate students and postdocs he had individually nurtured and mentored, who are now mostly very prominent members of the world’s scientific community and furthering the field that absorbed Alex’s passion.

The world is unlikely to see the likes of Alex Dalgarno any time soon again.