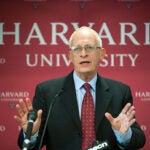 WASHINGTON, D.C. — The National Academy of Medicine (NAM) has awarded the 2016 Rhoda and Bernard Sarnat International Prize in Mental Health to Director of the Stanley Center for Psychiatric Research at the Broad Institute of Harvard and MIT Steven Hyman ’80. Hyman is also a core faculty member of the Broad Institute and Distinguished Service Professor of Stem Cell and Regenerative Biology at the Harvard Stem Cell Institute. He shares the honor with Robin Murray, a professor at King’s College London.

“Through their pioneering, innovative work, Dr. Hyman and Dr. Murray have each greatly advanced our understanding of mental health disorders and helped develop effective treatments that have changed patients’ lives for the better,” said NAM President Victor J. Dzau.

A leader in the world of mental illness research and treatment for more than three decades, Hyman was awarded the prize for his leadership in furthering the understanding and treatment of psychiatric disorders as biological diseases.

As a physician and scientist in the 1980s and 1990s, Hyman was at the forefront of the movement to understand the biological bases of mental disorders. Hyman led the National Institute of Mental Health (NIMH) from 1996 to 2001, when he made neuroscience and genetics central to the NIMH mission. As director, he launched several large-scale clinical trials to inform practice and treatment strategies, seeking to identify more effective real-world treatments for schizophrenia, bipolar disorder, and childhood and adolescent depression and other disorders. Following his tenure at NIMH, Hyman assumed an instrumental role in the revisions of the Diagnostic and Statistical Manual of Mental Disorders (DSM-5) and the World Health Organization’s International Classification of Diseases, encouraging dimensional approaches to mental illnesses that take into account genetics, co-morbidities, and emerging neuroscience data.

In his current post as director of the Stanley Center for Psychiatric Research at the Broad Institute, Hyman has created worldwide research collaborations devoted to unbiased, large-scale genetic studies of schizophrenia, bipolar disorder, and autism, and recruited outstanding stem cell scientists and neurobiologists to develop models with which to analyze genetics results.

The Sarnat Prize is presented to individuals, groups, or organizations that have demonstrated outstanding achievement in improving mental health. An endowment created by Rhoda Sarnat, a licensed clinical social worker, and Bernard Sarnat, a plastic and reconstructive surgeon and researcher, both of Los Angeles, supports the award. The Sarnats’ concern about the destructive effects of mental illness inspired them to establish the award in 1992.