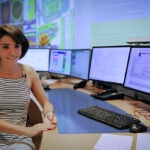 They ponder the universe

Molly Edwards is a scientist, and she also plays one on TV — or at least on YouTube.

Most days, Edwards can be found in the lab of Elena Kramer, the Bussey Professor of Organismic and Evolutionary Biology, where she is a Ph.D. student working to understand the genes that control the shape of Columbine flower petals.

Outside the lab, however, the Graduate School of Arts and Sciences student is the creator and host of “Science IRL (In Real Life),” a YouTube channel she launched more than a year ago while working as a lab technician at New York University, and is dedicated to taking viewers inside labs for an up-close-and-personal view of the day-to-day work of scientists.

“I was realizing that the way science works in real life isn’t very transparent,” Edwards said of her inspiration for the series. “How are the science concepts we learn from textbooks actually used by real scientists? It’s really easy to imagine what a doctor or a lawyer or a teacher does at work, but people don’t get to see what a scientist does every day.”

Though she had toyed with the idea of launching a video series for months, it wasn’t until nearly a year ago that Edwards, working with a shoestring budget and a crew made up of friends and volunteers, took the plunge and produced the channel’s first episode, on extracting DNA from plant samples.

Molly dissects a columbine flower and discusses how columbines are a great model for studying evolutionary development, or evo-devo

The series’ budget has grown from those modest beginnings. Edwards recently received an education and outreach grant from the American Society of Plant Biologists to cover the cost of production equipment and travel. The larger budget allows her to explore topics as varied as plant metabolism, butterfly pollination behavior, and genetically modified organisms.

Each episode features an entertaining mix of Edwards’ obvious enthusiasm and offbeat sense of humor. Episodes have shown tenured faculty playing with plastic dinosaurs, dancing in the lab, and even Edwards sporting animated “hair” to illustrate how a certain protein in our cells acts like a hair clip to tidy up our chromosomes.

Part of her idea behind the series, Edwards said, was to counter the portrayal of scientists as nutty, white-coated workaholics.

“I think that that stereotype is a huge barrier for young people entering STEM fields” — science, technology, engineering, and math — she said. “They can’t relate to the mad scientist characters they see on TV or in the movies, so they don’t want to go into those fields. But I’ve worked with so many people who defy that stereotype, so through ‘Science IRL’ I can introduce our viewers to the amazing, warm, compassionate scientists I know.”

Of all those who may find an interest in science piqued by the series, Edwards hopes her message reaches one group in particular: young women.

“I’m happy to be adding another science channel to YouTube that’s hosted by a woman,” she said. “And ‘Science IRL’ is becoming such a great platform for advocating for gender equality and diversity in STEM. All 10 episodes we’re producing with our grant feature women scientists. I want to provide role models to young women that represent their identities, because being able to visualize yourself as a scientist is such an important first step to pursuing a STEM career.”

While she hopes the videos can help people understand complex topics like PCR (otherwise known as polymerase chain reaction, the process used to amplify a DNA fragment into usable quantities), Edwards said the shows are not intended as hands-on primers for conducting lab work.

“The goal is to show you how something you’ve had to memorize in a science class comes to life in a lab. I’m not trying to teach you how to do a PCR, or the nitty-gritty biochemistry behind PCR,” she said. “But you’ll learn what it is, why it is awesome, and you’ll see how scientists use it in their research. Hopefully, you’ll walk away knowing it is this incredible tool that has opened all these doors in molecular biology.”

Edwards plans to continue producing episodes during her time at Harvard, and she ultimately hopes to continue communicating about science through her career.

“I really want to keep working to improve public perception of science and scientists,” she said. “I don’t know what will be the most effective way to do that, whether it’s becoming a prominent science communicator like Bill Nye or working to change science education policy so students can get into labs and get some IRL science experience at a younger age. But for now if talking about the things I do in the lab gets other people interested in science, then that’s my way of helping.”

Find out how butterfly pollination behavior influences plant evolution! Drs. Robin Hopkins & Heather Briggs take us through their research into the effects of pipevine swallowtail behavior on the evolution of flower color in the wildflower Phlox.