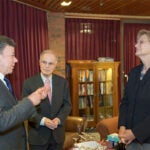 Susan J. Pharr, Edwin O. Reischauer Professor of Japanese Politics and director of the Program on U.S.-Japan Relations at the Weatherhead Center for International Affairs, has been honored by the Japan Foundation for her contribution to the study of the island nation and its international ties.

Recognized for her “richly balanced and fair stance of understanding for Japan and for her humble and sincere character,” Pharr will receive her Japan Foundation Award at an Oct. 18 ceremony in Tokyo, to be presided over by Minister for Foreign Affairs Fumio Kishida.

“It’s deeply gratifying to receive this recognition,” said Pharr, who called the prize of 3 million yen (about $29,500) “totally unexpected.”

“It’s a privilege to be a part of one of the world’s great centers for the study of Japan and Asia,” she added.

Pharr described her initial interest in Japan as “happenstance.” As a first-year graduate student at Columbia University, she took a recreational judo class with Japanese black belts. The friendships she made in the class led to sushi dinners, and, ultimately, courses on Japanese society and politics. She has been on the faculty at Harvard since 1987, and traveled in 2010 to Japan with President Drew Faust.

Pharr’s research has examined gender and politics, foreign policy, political corruption, and the role of media in politics. The illustrious honor puts her in the company of past winners such as Sen. William Fulbright, conductor Seiji Ozawa, and novelist Haruki Murakami.