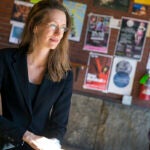 A tea bag–sized packet of insulin beta cells implanted in the arm eventually may replace the parade of pricks and daily insulin injections necessary to monitor and regulate blood sugar levels in a diabetic. That’s the vision that Douglas Melton, co-director of the Harvard Stem Cell Institute (HSCI), shared with HUBweek attendees last week.

At the event, the institute hosted the first “Horizons in Regenerative Medicine” series, three panel discussions showcasing how stem cells can provide new therapies, fresh ways to model disease, and new approaches to understanding fundamental biological processes such as aging.

For the first panel, “A Quantum Leap in Diabetes,” Melton was joined by Gordon Weir and Peter Amenta of the Joslin Diabetes Center, a Harvard-affiliated treatment and research institution; Sayeed Malek of Brigham and Women’s Hospital (BWH), also a Harvard affiliate; and Robert Millman of Semma Therapeutics. All of the panelists are working together in the Boston Autologous Islet Replacement Therapy (BAIRT) program, a collaborative between HSCI, those hospitals, and the biotech startup with the goal of finding a cure for diabetes.

“We have a good plan for the next generation of treatments, which will eliminate the glucose level checks and injections of insulin, and instead make what we call ‘nature’s own solution’ to the problem,” said Melton, who is also Xander University Professor in Harvard’s Department of Stem Cell and Regenerative Biology (HSCRB).

Melton spent the past 10 years developing the recipe to turn stem cells into beta cells and recently received the Ogawa-Yamanaka Stem Cell Prize for his efforts.

Now, using a process that was first described by Nobel Prize laureate Shinya Yamanaka in 2006, researchers can take a sample of blood cells from a diabetic and turn them into pluripotent stem cells. Thirty days after that, and a six-step process later, lab technicians can turn those stem cells into beta cells that can then be transplanted back into the same patient, offering healthy replacements for the diseased or dysfunctional cells. Because the cells are returning to the same body, the body’s immune system will not flag them as foreign and attack or destroy them.

BAIRT is planning a clinical trial to test these stem cell–derived beta cells in patients who have had their pancreas removed.

In addition to creating therapeutic solutions, stem cells also offer a new paradigm for understanding diseases and for discovering and testing drug therapies.

For decades, understanding how diseases work was limited to data gathered by studying biopsied tissues removed from patients or, for those diseases that affect tissues that cannot be removed, from mouse and other animal models.

However, as panelists in the second “Horizons in Regenerative Medicine” discussion pointed out, although mouse models are useful for determining a starting point in understanding disease mechanisms, they have proven ineffective for studying diseases of the brain.

Separated from humans by 90 million years of evolution, mice are fundamentally different both genetically and behaviorally. Unlike humans, mice are nocturnal, their dominant sense is olfactory, and they have very different social behaviors and cognitive abilities.

Mice, for example, don’t naturally develop Alzheimer’s disease or Parkinson’s disease, and as a result there is no way to verify whether a mouse model actually represents a given disease or condition.

“What would a schizophrenic mouse look like, and how would we know it has schizophrenia?” asked panelist Steve Hyman, director of the Stanley Center for Psychiatric Research at the Broad Institute of Harvard and MIT, HSCI principal faculty member, and Harvard Distinguished Service Professor in HSCRB. “Are they hearing squeaks?”

Instead, researchers can use stem cell science to create diseased human cells in a petri dish and then compare those cells to healthy human cells.

“We are at the beginning of a very exciting time that is going to change the way in which we investigate these disorders,” Hyman said.

The three panelists, who included HSCI principal faculty members Kevin Eggan of Harvard and the Broad Institute and Adam Cohen of Harvard, were careful not to overhype or overpromise the current state of the field. Stem cell technology is, as Eggan cautioned, still “in its infancy.”

Neurons created from stem cells more closely resemble neurons from a newborn in that they have not experienced a lifetime of wear and tear like the neurons of patients with late-onset neurodegenerative disorders, such as amyotrophic lateral sclerosis (ALS), Parkinson’s disease, and Huntington’s disease.

That said, disease modeling in a dish has become more advanced, allowing for more sophisticated models of more sophisticated diseases, said the panel. For example, Paola Arlotta and Lee Rubin of Harvard are creating multiple types of neurons in a single dish and letting them self-assemble into complete circuits, or mini-brains. Such mini-organs, or organoids, more closely reflect the complexity of the vast and interconnected neuronal networks in the brain.

Each person has about 86 billion neurons in the brain; these neurons are each connected to about 10,000 other neurons. Because of this, diseases in the brain affect not a single cell type but an entire circuit, and organoids enable the study of networks of cells, circuits, and electrical communication.

But how to collect data on these circuits is a challenge.

To overcome this obstacle, Cohen developed a device that uses light-sensitive proteins to stimulate and record electrical energy in a single cell and in networks of cells.

Using this tool, Eggan and colleague Clifford Woolf measured the activity of ALS-diseased motor neurons. ALS is a neurodegenerative disease that attacks the circuit that sends electrical impulses from the brain, down long motor neurons extending out into the limbs, and into the muscle tissue.

Eggan and Woolf found that the diseased motor neurons are hyperexcitable, meaning they fire more often than healthy neurons. Because they are more active, the diseased motor neurons wear out more quickly and expire, severing the line of communication between the brain and the muscles. This leaves patients without the ability to talk, walk, and breathe as the disease progresses, and eventually leads to paralysis and death.

The scientists used the ALS-affected motor neurons to test for compounds that calm the hyperexcitability and found that an FDA-approved drug called retigabine may be a potential therapeutic. The team, in collaboration with the ALS Association and GlaxoSmithKline, has begun recruiting patients for a clinical trial to test the effects of retigabine on ALS patients.

As part of the trial, Eggan and his colleagues will make motor neurons from the enrolled patients and test the effects of retigabine on the cells to see if the patient’s neurons made in a dish react the same way as the patient’s neurons in the body. If so, the trial will confirm that these cells could be used to predict how individual patients respond to specific drugs.

Another approach to determining how to restore normal cellular function is to study cells in an environment where they naturally stop working. Amy Wagers and Richard Lee, both HSCI principal faculty and HSCRB professors, search for factors in multiple body systems that impede repair and regeneration as people age. In pinpointing these factors, they may be able to “turn back the clock” on those cells so that people can remain mobile and healthy throughout life. Increasing health span, not life span, is their mantra.

“The field of aging research isn’t about the fountain of youth,” explained William Mair, assistant professor at the Harvard T.H. Chan School of Public Health. “That’s not the reason we do this research. It’s really because public health enabled us to live a long time in the last 100 years, and what it’s given us is an extended period of time to live in an unhealthy state. And the challenge is to find ways to make those extra years healthy ones.”

Wagers, Lee, and Mair were joined by Paola Sabatini of Boston University and HSCI principal faculty member Tracy Young-Pearse of BWH for “Ageless Aging,” the third panel discussion of the Hubweek series. They discussed how the field of regenerative medicine was informing approaches to research involving the aging process.

One way to do that is to tackle age-related diseases, such as Alzheimer’s disease. As Alzheimer’s progresses and more neurons in the brain die, those affected suffer from memory loss and a decline in their cognitive abilities.

“If doctors have to wait until these symptoms have presented, the neurons have already died, and it will be difficult to regain function,” said Young-Pearse, whose lab seeks to understand the underlying mechanisms of Alzheimer’s and identify new therapeutic interventions.

Before the neurons die, amyloid beta plaques and tau protein tangles build up in the brain. Young-Pearse’s lab is working with Biogen on a new trial to test an antibody that targets amyloid beta protein.

Rather than studying the process that goes wrong during aging, Sabatini looks at what is working in the body. Bridging scientific disciplines, she compares centenarians’ genetic, behavioral, and medical histories to understand the perfect storm of conditions that has allowed them to live long and healthy lives.

The greater Boston biomedical ecosystem sits as a backdrop not just for Sabatini but for the many scientific collaborations and therapeutic advancements presented during the “Horizons of Regenerative Medicine” series and other HUBweek events.

“One of the fantastic things about living in Boston is that we are probably the world’s epicenter, if not the world’s best place, to do biomedicine,” said Melton, who gives credit to the caliber of research institutes, hospitals, biotech startup companies, and pharmaceutical companies in the area.

In reference to the movement of his research from the lab to the clinic, Melton said, “Frankly, this would not have been possible if this work had been started somewhere else.”