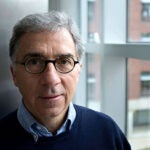 At a Meeting of the Faculty of Arts and Sciences on Oct. 4, 2016, the following Minute was placed upon the records.

In 1966, on the eve of his tenure review, Larry Dean Benson published “The Literary Character of Anglo-Saxon Formulaic Poetry.” Its timing and subject matter set this article apart, because it pointedly targeted the scholarship of a senior colleague who was about to pass judgment on Larry’s promotion. According to departmental lore, his case went forward despite certain voices in opposition. Such boldness is not surprising in someone who, fresh out of high school, enlisted in the Marines for a five-year tour that took him to Korea, where his unit saw action in the invasion of 1950. His wartime experience puts Larry’s fierce sense of academic freedom into perspective. If he was going to receive tenure, it would be on his own terms.

One of the most accomplished American medievalists of the twentieth century, Larry Benson retired in 1999 as the Francis Lee Higginson Professor of English, Emeritus. After receiving his Ph.D. from the University of California–Berkeley in 1959, Larry began a long, illustrious career at Harvard, which included several years as Senior Tutor of Quincy House and two stints as chair of the Department of English. He wrote and edited many books, the most important of which were “Art and Tradition in ‘Sir Gawain and the Green Knight’” (1965); Malory’s “Le Morte d’Arthur” (1976); “King Arthur’s Death: The Middle English ‘Stanzaic Morte Arthur,’ and ‘Alliterative Morte Arthure’ (1974); and, most famously, “The Riverside Chaucer” (1987), for which, as general editor, he orchestrated a complex network of collaboration. Stephen Barney, one of the many editors, writes, “Larry did a fantastic job of editing: unfussy, practically always right, capable like truly accomplished people of stepping out of the way when it was appropriate, his eye steadily on the main thing.” Among Larry’s many other publications, a selection of his essays are reprinted in Contradictions: From Beowulf to Chaucer (1995).

Larry was a pioneer in the digital humanities long before anyone thought of calling it that. After “The Riverside Chaucer” was completed, he seized the computer tapes from the publisher and, realizing the potential in machine-readable texts, taught himself to code Unix. One result was A Glossarial Concordance to “The Riverside Chaucer” (1993); another was his Chaucer website, which went up in the 1990s and since 2004 has tallied over 83 million visits from students across the world.

Larry was a brilliant lecturer whose Core course on The Canterbury Tales enrolled as many as 300 students. One of his teaching fellows, Susanna Fein, recalls his style of lecturing:

He characteristically taught with nervous energy, pacing a bit, jingling coins in his pockets, conveying through his own penetrating intelligence the brilliance, humor, and humanity of Chaucer. I learned much by watching him teach—each term was better than the last—never, for me, a repetition. He would enter the room brimming with new ideas born of his editorial attention to Chaucer. Even though I was there to aid the undergraduates, I came to feel like this was a master seminar just for me.

He taught a variety of other courses, from surveys to specialized seminars. From 1995 to 2009 he brought his course on The Canterbury Tales to Harvard’s Extension School.

What graduate students remember most vividly about Larry are Thursdays. In the late 1970s he started the Medieval Doctoral Conference, during which graduate students and professors gathered to discuss a paper. It was Larry’s way of fostering a scholarly community. The weekly ritual would begin with lunch at a local seafood restaurant, as Christopher Cannon, a former graduate student, recalls:

[We would] all get together and enjoy each other’s company, irrespective of what the topic for the seminar was later. The speaker was always invited. And sometimes we did talk about something serious. But it was usually pretty raucous. . . . It really bonded us as a cohort of medievalists (it was so good for our confidence) but he did it all by force of his own happiness.

At these lunches Larry’s vigorous, irreverent sense of humor was at its best in exposing the pretensions of those who should know better. He took special delight in celebrity scandals. Later in the afternoon on Thursdays the group would reconvene for the talk, still in a buoyant mood from lunch. No one bothered to think too hard about what kind of professionalization they were inflicting on the graduate students, but it worked. Now over thirty-five years old, the Medieval Doctoral Conference continues to be a centerpiece of the community of medievalists in the English Department.

Larry’s self-deprecating manner deflected attention from his enormous accomplishments, but his longtime colleague Derek Pearsall was not fooled:

Larry was a master of deceit. He deceived everyone into thinking that he was an idle, irresponsible, philistine son of the Arizona soil, whose main pleasure was in drinking and smoking and telling stories of a generally incorrect nature, and whose greatest delight and cause of self-congratulation was to have put one over on the eastern academic establishment. None of this was true, or nearly none of it. Larry was a scholar of great range and depth of learning whose judgment was meticulous and expressed only on those subjects that he knew about (a rare form of restraint).

His distinctive gifts as a scholar included a capacious memory, a philologist’s attention to detail, and a literary critic’s perceptiveness. The voice that emerges from his writing is clear and compelling, always attuned to the literature he loved.

His many honors include admission to the American Academy of Arts and Sciences in 1982. In 1974 he was made a fellow of the Medieval Academy of America, an organization he cared about deeply. He also served on the editorial boards of numerous journals and publishing projects.

Larry Benson died on Feb. 16, 2015, at the age of 86. Deeply devoted to his family, he was predeceased by his wife, Margaret, and his son Gavin. He is survived by three children—Cassandra, Amanda, and Geoffrey—and by ten grandchildren and one great-grandchild.