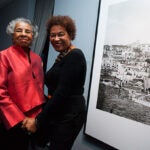 Iconic 75-year-old singer-songwriter Bob Dylan on Thursday became the first American since Toni Morrison, in 1993, to win the Nobel Prize in Literature. The honor, for “having created new poetic expressions within the great American song tradition,” stirred reactions nearly as passionate as those that have greeted Dylan’s music through the years. The Gazette asked poet Jorie Graham (“I can’t wait to hear his acceptance speech — I hope he writes a song”) and other Harvard scholars to share theirs.

His work is prophetic. It addresses openly issues of criminal justice or injustice, poverty, racism, abuse of power. To bring attention to his work now is to invite a whole new generation to listen to his masterful, nuanced rage regarding issues that press on us every bit as violently as they did when he wrote those songs.

On a literary level, he continued and enriched the centuries-old ballad tradition, brought it into our time, made it politically relevant and searingly effective. He also created new forms of narrative structure. He tells a good story and creates great characters — take “Lily, Rosemary and the Jack of Hearts.” The reach of his protest lyrics has transcended nations and languages even as its sound is so deeply American it transformed the range of the American language itself — which great art does for its language. The inventiveness of his imagery and his rhyme schemes is legendary. And yet, however universal his lyrics, they stand alone, haunting, effortlessly original. Greatness in art also includes the ability to transform your medium and move it forward — and Dylan has done that with his unique blend of surrealism and gritty realism. Tonally, he is able to be both romantic, ironic, and wry, accusatory yet nostalgic. His way of blending these tones is as much in his writing as in his extraordinary and unique singing voice. So it is hard to hear it as poetry alone, as it is song. Though yes, he is influenced, as he says, by many poets. Do his lyrics stand alone on the page? It’s an open question — some more than others. Which is already very rare. But he is a minstrel, a joker, a visionary, a ministering force, a witness, a jack of hearts …

Perhaps one need not necessarily think of his work in relation to poetry; the committee has extended the literature category this year to include songwriting — a great art form in its own right. It is a terrific decision. You’d be hard-pressed to find someone of my generation who is not thrilled to see Bob Dylan rewarded.

As for why the committee might choose Bob Dylan in this very year? It’s anyone’s guess, but current world history includes a dangerous rise of violent, racist, misogynist forces in the U.S., so maybe they are trying to remind us to listen to ourselves, and hear our predicament once again in Bob Dylan’s powerful lyrical call to accountability.

Though I confess I still cling to a forlorn hope that Philip Roth will receive the Nobel Prize in Literature, I am utterly delighted that it went to Bob Dylan. He was for me and my entire generation the great folk poet, the voice of protest, anger, and a longing for justice, strangely intertwined with irony, desire, and apocalyptic hope. He managed to capture and enhance the brilliant inventiveness and originality of American music, with its spectacular blending of races, faiths, and nations.

Favorite songs: The anthem of my youth was “The Times They Are a-Changin’,” and I’ve always had a soft spot for the “Subterranean Homesick Blues.”

I have no idea why it happened this year. I’m never sure why any of them happen when they happen. But it is a beautiful acknowledgement that the “literature” that has always been the most familiar and meaningful to most people in the world is the literature of popular and folk songs. Anyone who doubts that Dylan is a writer, or that songwriting is not an art, should read his memoir, “Chronicles,” or just his comments, here and there, on other people’s songs. He is a scholar and a master of the genre.

Favorite songs: I have too many favorite songs to name. I love “Forever Young,” though it’s uncharacteristic. I also like a song called “Where Are You Tonight?” on the album “Street-Legal.” I’m not saying these are his best, but they’re two I’ve always liked.

Like the Lord, the Nobel committees work in mysterious ways. Sometimes they seem to like poking American conservatism in the eye, as with the prizes to Jimmy Carter, Al Gore, and Paul Krugman during the George W. Bush years and Barack Obama a few months after Bush left office. But the literature prize committee always has surprises in store, perhaps because the category of “literature,” and high achievement in it, are so difficult to define.

Favorite songs: “Changing of the Guards,” from “Street-Legal.” As with many of Dylan’s lyrics, I have no idea what they mean, but they are haunting, evocative, and utterly original.

Richard Thomas, the George Martin Lane Professor of the Classics

The Nobel Committee has clearly understood the phenomenon that is Bob Dylan. Since that has happened, I’m not surprised. Bob Dylan’s genius consists in his being in touch with the strands that are part of American culture over the last 200 and more years, and weaving them into songs that, particularly in performance, are sublime expressions of what it means to be human. So what could be surprising about recognizing that?

Favorite songs: Right now, “Mississippi,” but that could change any minute.