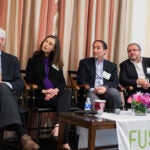 The knotty problem of bringing regenerative medicine to market

HPV-vaccinated women may only need four screenings — ever

Women may only need cervical cancer screening every five to 10 years — instead of every three years, as currently recommended — and may be able to start screenings later in life, according to a new study from the Harvard T.H. Chan School of Public Health.

The researchers found that women who have been vaccinated against human papillomavirus (HPV) require less-intensive screening because HPV causes almost all cases of cervical cancer. Accordingly, the risk of these women developing cervical cancer is quite low.

The study appears today (Oct. 17) in the Journal of the National Cancer Institute (JNCI).

“This analysis enabled us to examine what would happen if we shifted from the current way we screen for cervical cancer — essentially, recommending the same type of screening for all women — to screening that takes into account whether women have been vaccinated against HPV and therefore face a substantially lower risk of cervical cancer,” said Jane Kim, professor of health decision science at Harvard Chan School. “We found that continuing intensive screening among HPV-vaccinated women yields excessive costs and harms with little to no health benefit.”

Since 2012, major guideline-making organizations have recommended that all women in the United States be screened for cervical cancer every three years beginning at age 21 with a Pap test (which checks for abnormal cells in the cervix), with the option of switching to a combination of Pap test and HPV testing (known as “co-testing”) every five years beginning at age 30. However, current U.S. guidelines don’t differentiate screening recommendations based on a woman’s HPV vaccination status.

The Harvard Chan researchers developed a disease-simulation model to estimate the risks and benefits of various screening protocols. Their model projected the health and economic effects of three different types of HPV vaccines that are currently approved for use, two of which have been available since 2006. The goal was to pinpoint screening strategies that would provide the biggest health benefit in the most cost-effective way.

According to the model, women with the lowest risk of cervical cancer — those vaccinated with the new “nonavalent” HPV vaccine (HPV-9), which targets seven types of HPV that cause nearly 90 percent of all cervical cancers — would need screening only four times, every 10 years starting at age 30 or 35. Women vaccinated with earlier versions of the HPV vaccine — the bivalent and quadrivalent vaccines (HPV-2 and HPV-4), which target two HPV types that cause roughly 70 percent of cervical cancers — would need screening every five years starting at age 25 or 30.

The researchers also found that screening with HPV testing alone would provide similar health benefits and value as a Pap test or co-testing, because the HPV test is highly sensitive and can more efficiently identify women who are likely to develop cervical cancer.

One limitation of the study is that it modeled scenarios in which women were fully vaccinated in pre-adolescence (as recommended) and fully compliant with screening protocols. The researchers noted that future studies should take into account actual vaccination uptake rates in the population and data on screening compliance in vaccinated women as these data become available over time.