A sound all his own 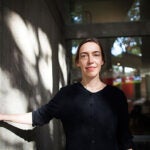 Harry Yeff, an award-winning beatboxer who performs under the stage name Reeps One, arrived on campus Monday for a weeklong residency with the Office for the Arts- and Arts @ 29 Garden-sponsored Learning from Performers program.

The 26-year-old Yeff, who hails from London, comes to Harvard with millions of views on YouTube, and a newly created #ReepsHarvard hashtag. More than 150 fans posted “sound tree” videos to social media for him to incorporate into his residency.

Early in the week Yeff spoke to students in two classes, Aleksei Nazarov’s “Sound of Language” in the Department of Linguistics and Ruth Lingford’s animation workshop in Visual and Environmental Studies. He created a spontaneous public art project Tuesday on the Science Center Plaza, and is scheduled to lead a Saturday afternoon beatboxing workshop ahead of an evening performance at Lowell Lecture Hall. Both events are free and open to the public.

GAZETTE: What prompted you to start experimenting with your voice as an instrument?

YEFF: I played trumpet, violin, and drums when I was young, but I was frustrated not having an instrument with me all the time. I realized I have a creative freedom that I didn’t quite achieve when playing those instruments. I use beatboxing to practice and understand music theory, asking, “Why do sounds sound the way they do?” I fell in love with designing my own instruments. I thought about how a drum sounds and how to tune my voice and make a drum sound. I felt excited and in control. It’s almost a freedom within the voice that allows me to excel.

GAZETTE: How did you cultivate your artistry as a beatboxer?

YEFF: A lot of people associate it as copying songs, which is part of the art. My growing up in the electronic environment made me believe in finding my own identity and creating my own compositions. I’ve been part of quartets and involved in projects where I learn tunes, but for me, I enjoy creating my own pieces.

Even though I’m a vocalist, I’m also more, by ethos, an electronic music producer. I have more in common with my friends in the production realm than singers. At first, I didn’t expect it to have anything beyond cathartic sharing, and all of a sudden people connected to it and it snowballed. It was a sound that would connect with people.

GAZETTE: What is your process for composing?

YEFF: I always think clearest in the early morning and late at night. Because my voice is always with me, it connects to my daily routine as my consciousness. I might have a traditional sit-down for an hour. I have created in stranger environments, such as underground on the Tube and surrounded by people. I can be outside, a car can go past, and I can hear five seconds of something that inspires me. My rehearsal studio is with me 24/7.

GAZETTE: You perform shows that last an hour. What does it take to keep your voice healthy?

YEFF: It is extremely physical. I’m taking a tool used a certain way for a long time, and bending and stretching for hundreds of new sounds. You would think that process would lead to unsustainable extremes. It’s not just the voice. It’s pressures, not just vocal cords. Music, for me, is when you get out of your comfort zone. A lot of sounds are on the experimental side of things, but I would never do anything that didn’t feel good.

GAZETTE: With an instrument that is always with you, are you able see it as having its own separate identity?

YEFF: What becomes a challenge is turning it off. I’m extremely passionate about everything I do, and it’s extremely important to understand its function in my life. When I’m on stage it’s a completely different mentality. Reeps brings up hyper parts of my personality. I’m not that character with my girlfriend or family.

GAZETTE: You have spoken to Aleksei Nazarov’s students in “Sounds of Language.” In what ways can the music subculture of beatboxing speak to the scholarly world of linguistics?

YEFF: Despite my main realm being in entertainment, I have a deep love for deconstruction. I’m interested in presenting my ideas and being tested and seeing where the crossovers live — what beatboxing offers phonetics, but also what phonetic systems can be used to notate beatboxing. Beatboxing has evolved into a hyperawareness of speech sounds. There’s a meta-language, which is the ability to communicate abstractly through the aesthetics of your sound. There are more and more wonderfully unique sounds. It’s so important for the abstract to have a place in the academic.