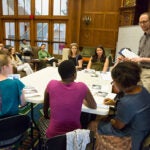 A love-hate punctuation guide from Abramson and Pinker

Do semicolons fill you with rage? Does a perfectly placed hyphen warm your heart? Even in an age dominated by the 140-character tweet, the emoji, and the ubiquitous Internet acronym, proper punctuation remains a going obsession. With National Punctuation Day set for Saturday, the Gazette sought the judgment of two campus wordsmiths: Jill Abramson, senior lecturer on journalism and former executive editor of The New York Times, and Steven Pinker, Johnstone Family Professor of Psychology and author of “The Sense of Style: The Thinking Person’s Guide to Writing in the 21st Century.”

GAZETTE: What type of punctuation gives you the most pleasure?

ABRAMSON: My favorite is the period. It prevents run-on sentences. It makes you think coherently and express yourself succinctly. It drove me crazy as the editor of The New York Times when the first paragraph of a story was one long sentence with lots of clauses separated by commas. The Wall Street Journal, where I worked for 10 years, insisted on short and snappy sentences that ended, quickly and brilliantly, with my beloved period.

PINKER: I like the serial comma, also known as the Oxford comma: the comma that demarcates the penultimate item in a conjoined list, just before the conjunction: “Crosby, Stills, and Nash” as opposed to “Crosby, Stills and Nash.” (Many disagree with me, including The New York Times and the musical group that calls itself Crosby, Stills and Nash.) The serial comma can prevent ambiguity, as in This book is dedicated to my parents, Ayn Rand and God. It can also cut off “garden paths,” the local ambiguities that can derail readers as they work their way through a sentence. For example, the sentence He enjoyed classical music, conversations with his wife and his horse momentarily calls to mind the famous Mister Ed.

GAZETTE: What type annoys you most?

ABRAMSON: The punctuation that annoys me the most is the ellipses, often misused in journalism to shorten quotations. I’ve learned the hard way that you can distort someone’s meaning when you abridge what they’ve said with ellipses.

PINKER: The comma splice. I’ll even correct it in graduate students’ email, as in I am going to try and outline the logic again briefly here, please let me know if this is still unclear. Comma splices always create a garden path, and they are easy to avoid, requiring no greater skill than the ability to identify a complete sentence.

GAZETTE: What type is most underrated?

ABRAMSON: The most underrated is the parenthesis. A parenthetical thought can be more interesting than the sentence that contains it.

PINKER: The most underrated is the semicolon. It’s the easiest way to avoid a comma splice, and signals to the reader that one sentence is conceptually connected to another without necessarily spelling out the coherence relation that binds them, such as “nonetheless,” “that is,” or “for example.” It can also ease the parsing of lists of lists, as in My favorite ensembles of the 1970s are Simon and Garfunkel; Crosby, Stills, Nash, and Young; Emerson, Lake, and Palmer; and Seals and Crofts.